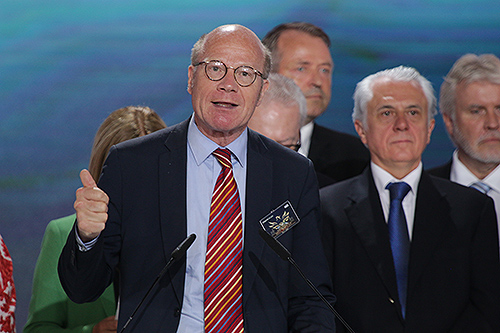 NCRI – A leading finish politician has rallied in support of the call for ‘regime change’ in Iran so that human rights and democracy can take over.

“Today, Iranian people are suffering because there is a cruel dictatorship in Tehran,” Kimmo Sasi told the huge annual Iran Freedom rally in Paris on June 13.

“The leadership uses the people’s money to fulfill wrongful purposes. There is no freedom of expression in the country, young people are executed, and women do not have the appropriate role in Iranian politics.”

“Madam Rajavi’s 10-point program is the best way to go forward in Iran to get democracy and good development for the country, and we advocate that program,” he said.
“The international community must feel the threat posed by Iran. We want to have peace; we don’t want to have nuclear weapons. We want to have peace and not export of terrorism. We must maintain sanctions to force the Iranian dictatorship to be changed.”

“We have a dream of change in Iran. Iranian people can do the change. The suffering of the people in Iran must end, and we need regime change in Tehran. You and we can do it. You and we must do it now,” he added.

Iranians and their international supporters including 600 international lawmakers and dignitaries attended the Paris rally in support of Mrs. Rajavi’s 10-point plan for a future free Iran.

The message was that in order to stop nuclear proliferation in Iran and defeat Islamic fundamentalism there needs to be support for Iran’s Parliament-in-exile, the National Council of Resistance of Iran (NCRI), to bring about regime change.

Previous articleLeading Euro-MP: We must support the Iranian opposition for democracy
Next articleUK lawmakers urge P5+1 to step up pressure on Iran regime in nuke talks