Leading Euro-MP: We must support the Iranian opposition for democracy 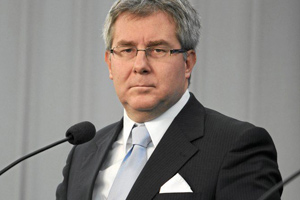 Western nations have a ‘duty’ to support the Iranian Resistance in its struggle to bring freedom and democracy to Iran, a Vice President of the European Parliament has said, and ‘regime change’ in Iran is needed to stop Iranian meddling in the Middle East and domestic repression inside Iran.

The West must heed a call by some 100,000 supporters of democracy for Iran who took part in the annual Iran Freedom rally in Paris on June 13, Ryszard Czarnecki, an EP Vice from Poland, wrote in the United Press International on Sunday.

“With the end-of-June deadline for a nuclear agreement with Iran fast approaching, prominent political and government leaders, past and present, from around the world are stepping up calls to beware of making concessions that would embolden the mullahs in Tehran and further destabilize the already shaky Middle East,” he wrote.

“Nowhere was this more evident than at a recent rally outside Paris attended by 100,000 supporters of the Iranian resistance at which dignitaries and delegations from 69 countries on five continents heard the leader of the opposition and distinguished jurists and politicians warn that a nuclear deal is not enough. Only regime change will stop Tehran’s meddling in Syria, Iraq, Yemen, and its repression of its own people.”

“I was inspired by the words of Maryam Rajavi, the leader of the National Council of Resistance of Iran (NCRI). Hers is the kind of leadership that Iran needs, not that of Ayatollah Khamanei and President Rouhani, who promise only terrorism that leads to uncounted deaths and misery in and out of Iran, a depressed economy in what should be a thriving nation, and millions of people Iiving in fear of constant repression.”

Mr. Czarnecki quoted Mrs. Rajavi as saying: “The people of Iran neither want nuclear weapons, nor meddling in Iraq, Syria or Yemen, nor despotism, torture and shackles. The people of Iran are the tens of millions of enraged teachers, students, nurses, and workers who demand freedom, democracy, jobs and livelihood.”

The Poliah MEP pointed out that among 33 prominent figures from the United States to speak to this gathering were three U.S. presidential candidates, a former chairman of the Joint Chiefs of Staff, a former secretary of Homeland Security, former directors of the FBI and CIA, a former commandant of Marine Corps, and a former Army Chief of Staff, as well as a delegation from the U.S. House of Representatives. Many others sent video messages, including past or present senators Joseph Lieberman, who also was a candidate for vice president; John McCain, chairman of the Armed Services Committee; and Bob Menendez. House members included Democratic leader Nancy Pelosi, House Foreign Affairs Committee chairman Edward Royce and ranking Democrat Eliot Engel; Ted Poe, chairman of the House Foreign Affairs Subcommittee on Terrorism, Non-Proliferation and Trade; and Ileana Ros-Lehtinen, chair of the House Foreign Affairs Subcommittee on the Middle East and North Africa.

“Now, it is up to the West to heed the messages of the Paris rally.”

“To the P5+1 countries negotiating a nuclear deal — Stop appeasing the mullahs. Do not believe anything Tehran says about its nuclear intentions.”

“To freedom-loving peoples everywhere — Support the Iranian Resistance. Remember that regime change in Tehran will eliminate the nuclear threat.”

“To those nations standing up to ISIS and Syria’s dictator Bashar al-Assad — don’t climb into bed with Iran. Iraq and its friends must defeat ISIS by themselves. In this case, the enemy of my enemy is not my friend. Here, the enemy (Iran) of my enemy (ISIS) is still my enemy.”

Helping to support the Iranian people in their resistance against the regime “is the duty of all peoples and all nations who seek peace in the Middle East and a welcoming back of Iran into the family of democratic nations,” Mr. Czarnecki said.