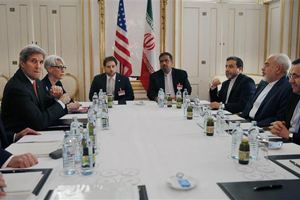 Iran tries to wiggle out of nuclear pledges which has made in an interim nuclear agreement with world powers three months ago, Western officials suggested on Sunday, Reuters reported.

“It feels like we haven’t advanced on the technical issues and even gone back on some,” a Western diplomat said on condition of anonymity.

Another Western official traced the apparent backtracking to a speech by the Iranian regime’s Supreme Leader Ali Khamenei last week, in which he ruled out freezing sensitive nuclear work in the country for a long time.

Citing an internal government intelligence assessment of Khamenei’s speech, a Western diplomat told Reuters: “His speech last week seems aimed at constraining (Iranian negotiators’) flexibility in the last stretch of the talks, as he has done at a number of key intervals over the last two years.”

He added that Khamenei’s vague directives “could leave the negotiators with some limited room to play with and to find creative solutions that could help wrap up the diplomatic process.”

The main differences are on the pace and timing of sanctions relief for Iran and on the nature of monitoring mechanisms to ensure Tehran does not cheat on any agreement.

U.S. and European negotiators also want to ensure there is a mechanism for restoring sanctions if Tehran fails to meet its commitments under any future accord.