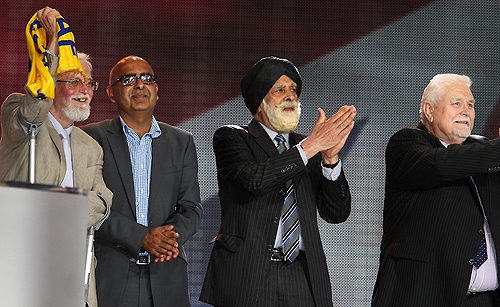 NCRI – Iranian opposition leader Maryam Rajavi is calling for open democracy and freedom of belief for all faiths, Lord Singh of Wimbledon told the BBC on Tuesday.

Indarjit Singh, a cross-bench member of the United Kingdom’s House of Lords was speaking on BBC Radio 4’s ‘Thought for the Day’.

Lord Singh told the BBC that he had attended a “huge political rally in Paris over the weekend as part of a delegation of parliamentarians from different parts of the world”.

“The rally of more than 100,000 was organised by Iranians who had fled persecution in Iran. In an echo of Guru Arjan’s teachings, the leader of the rally, a woman Maryam Rajavi, spoke of the need for open democracy and freedom of belief for all faiths”.

Many of the speakers had themselves suffered torture or imprisonment, or the loss of near ones at the hands of the present rulers, Lord Singh said, but there was no bitterness in their contributions; only a desire to move on.

“To me this gives us a glimmer of real hope in the otherwise all-pervading gloom of intolerance in our strife-torn world.”

The Iran Freedom rally in Paris was attended by some 600 international lawmakers and dignitaries in support of Maryam Rajavi’s 10-point plan for a future free Iran.