Rudy Giuliani: Leaders of Iranian regime must be tried for crimes against humanity 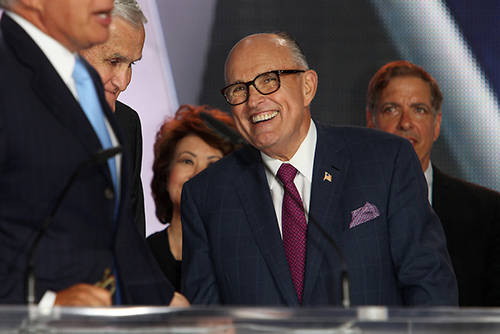 The leaders of the clerical regime in Iran should be tired for crime against humanity for killings and executions of hundreds of thousands of people, Former mayor of New York City Rudy Giuliani told the largest gathering of Iranian opposition held on Saturday in Paris.

Mr. Giuliani who was a Republican presidential candidate in the 2008 said: “The ayatollahs must go. He and Hassan Rouhani and Ahmadinejad and all of the rest of them should be put on trial for crimes against humanity for the thousands and hundreds of thousands of people they have killed, and it is about time we stop ignoring it. Where is our decency and morality?”

“We have allowed this for years, hundreds of thousands of Iranians slaughtered, more being slaughtered today than before. American soldiers killed by the Quds Force. For how much longer are we going to allow this? What happened to the America that supports democracy and freedom? In Syria, we draw red lines, and like cowards, we sit back,” he added.

On nuclear negotiations with Iran, Mr. Giuliani said: “We unequivocally support a non-nuclear Iran. What does a non-nuclear Iran mean? It does not mean two months or one year away from being able to have a nuclear missile. It doesn’t mean an Iran that will become a nuclear power in 10 years. What it means is Iran should have no, none, zero nuclear capacity because the regime in Iran can’t be trusted with it.”

“I will not support a candidate who does not have the moral fiber and the courage to stand up to the ayatollah and tell him we are going to do everything we can to get you out and you will never become a nuclear power. I will make sure every single candidate is asked: are you for regime change in Iran?” he said.

Giuliani expressed support for the National Council of Resistance of Iran (NCRI) and its President-elect, Maryam Rajavi, as an alternative to the clerical regime in Iran. He said: “There is an alternative: Madam Maryam Rajavi, the NCRI, all of you, and all of the people inside Iran, who yearn for all human beings yearn for: freedom, respect, dignity, an ability to live with the religion of their choice and a country that respects the right of women. How could you make that more clear by having a woman running this organization.”

He said the U.S. has broken its promises to Camp Liberty Iranians who bear the biggest burden and he will do his best to make good on those promises. “I am extremely embarrassed by the fact that my country has broken its promise to people who are now in a concentration camp called Liberty. They lied to us. I am ashamed and I am here to apologize, and we will do everything we can to make good on that promise.”

“To the people of Camp Liberty: You bear the biggest burden. You are conducting yourself with dignity and strength and show us what the future of Iran can be. You show us the character of the people of Iran,” Giuliani added.