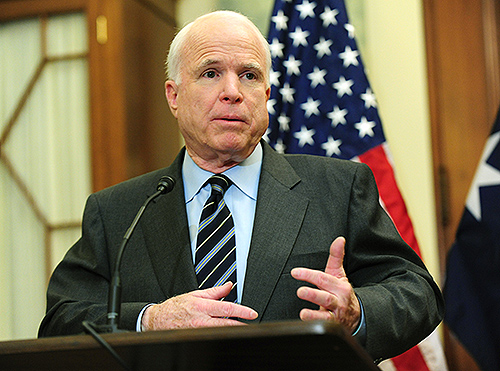 Senator John McCain, Chairman of the ‎U.S. Senate Arms Services Committee has sent a video message to the Iran Freedom rally held on June 13 in Villepinte, north of Paris. In his message, Senator McCain said: “I am very proud to be with you for this remarkable and inspiring ‎display of Iranian unity against the terror and violence and ‎extremism of the regime in Tehran.”

Senator McCain expressed support for the Iranian opposition activists in Camp Liberty and said: “The people who are under attack in Camp Liberty, the American people always stood up for ‎those fighting for the freedom and human dignity around the world ‎and that’s why the American people will stand with you at this time. ‎Your cause is our cause and your fight is our fight.‎”

Senator McCain also expressed concern about Iranian regime’s meddling in the region as the epicenter of radical Islamic extremism and said: “Today, we live in a world in crisis. Across in the Middle East, Iran is ‎setting fire to sectarian tensions in Iraq, Syria, Lebanon, Yemen ‎and beyond, killing thousands and driving millions out of their ‎homes. The Iranian regime, the true epicenter of radical Islamic ‎extremism in the world, continues to fund terror and inside chaos in ‎its campaign for domination.”‎

Senator McCain concluded his message by assuring he will do his best to uphold the United States’ pledge to Camp Liberty residents. He said: “We know those in Camp Liberty are in danger and the Obama ‎administration is taking far too long to relocate them to safety. ‎But I can assure you of one thing; I would do everything in my ‎power as chairman of the armed services committee to pass ‎legislation to uphold our pledge to the people of camp liberty.‎

“The American people will stand with you in this fight. I thank you ‎for your courage and commitment to this vital cause.”

Previous articleTop former US officials urge dialogue with Iran’s opposition
Next articleRudy Giuliani: Leaders of Iranian regime must be tried for crimes against humanity