This afternoon, a group of families of the martyrs of the People’s Mojahedin Organization of Iran (PMOI/MEK) gathered in Tehran’s Khavaran Cemetery and chanted slogans, including “(Ebrahim) Raisi, Henchman of 1988.” Many MEK martyrs executed in the 1988 massacre of political prisoners are buried in mass graves in Khavaran, which has turned into a memorial for the families of the martyrs.
MEK supporters carried pictures of their martyred loved ones and laid flowers at the unmarked graves. The families also carried placards with the signs, “Khavaran, the enduring document of crime against humanity in Iran, the 1988 massacre” and “Until the prosecution of, and accountability for the criminals we will neither forgive, nor forget.”

In a letter to the Secretary-General of the United Nations and the leaders of the European Union and the United States on May 4, 1112, members of the families of the MEK martyrs called for urgent action to prevent further destruction of their relatives’ graves by the religious fascism ruling in Iran. Referring to Khomeini’s criminal fatwa ordering the liquidation of all MEK political prisoners who had remained steadfast in their support for the MEK, the letter reads,” The Iranian regime has embarked on erasing the traces of the evidence on the massacre by destroying the mass graves where they are buried.” They called for “immediate measures to prevent further destruction of martyrs’ graves and the elimination of the traces of crimes which amount to the psychological torture of thousands of bereaved families across Iran.”
At the same time, “Justice For Victims Of 1988 Massacre In Iran-JVMI” announced that 152 former UN officials, internationally renowned human rights experts, and legal experts wrote a letter to Michelle Bachelet, the United Nations High Commissioner for Human Rights, calling for the establishment of an international commission of inquiry into the 1988 massacre of thousands of political prisoners in Iran. The massacre, which the UN Special Rapporteurs described as a crime against humanity in September 2020.

The signatories of this open letter include Mary Robinson, former UN High Commissioner for Human Rights and former President of Ireland; former President of East Timor; former Prime Minister of Canada; former Deputy Secretary-General of the United Nations; 28 former UN Special Rapporteurs on Human Rights; as well as former heads of UN Commission of Inquiry into Human Rights Violations in Eritrea and North Korea; former Chief Prosecutor of the UN Criminal Tribunal for the former Yugoslavia and Rwanda; former Prosecutor of the Lebanese Special Court and the first President of the UN Special Court for Sierra Leone; former Vice President of the European Court of Human Rights; and three former judges of the European Court of Justice; plus six Nobel Peace Prize winners.

In 1988, Khomeini issued a fatwa ordering the execution of all political prisoners affiliated with the Mujahedin-e Khalq (MEK) organization. The letter by UN experts and others reads, “There is a systemic impunity enjoyed by those who ordered and carried out the extrajudicial executions.” Many, such as Ebrahim Raisi, the current Judiciary Chief, and Alireza Avaei (AKA Avayi), the regime’s Justice Minister, had occupied key judicial, prosecutorial, and state institutions.

Mrs. Maryam Rajavi, the President-elect of the National Council of Resistance of Iran (NCRI), urged the UN Security Council and all UN member states to formally condemn Khomeini’s fatwa for the 1988 massacre of political prisoners as genocide and a crime against humanity.

Secretariat of the National Council of Resistance of Iran (NCRI)
May 13, 2021 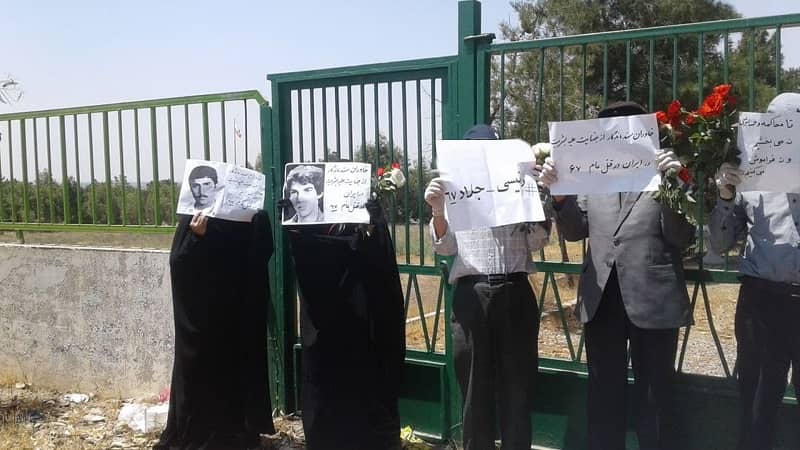