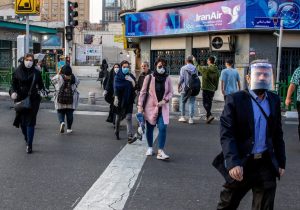 Rouhani: We have been progressing step by step in the past three months with no relapse anywhere

Maryam Rajavi: Rouhani’s ridiculous claims will not be taken seriously by anyone. He has set up a Party of Lies

A spokesman for the regime’s health ministry said today that 2,346 people had contracted the Coronavirus in the past 24 hours. Compared to two weeks ago, the number of patients has almost doubled. However, today Rouhani claimed, “We have been making progress step-by-step in these three months, having no relapses anywhere. Altogether, we have made good progress in the fight against this dangerous virus and have almost managed to contain the disease.”

A spokesman for Isfahan University of Medical Sciences speaking to Mehr state-official news agency, announced a “50 percent increase in Coronavirus outpatients in Isfahan compared to last week” and said, “It would be alarming if people’s sensitivity to this disease decreases because we will face an outbreak in the entire Isfahan Province.” He added, “409 patients with Coronavirus have been hospitalized in two designated hospitals in Isfahan, out of which 113 have been reported to be in critical condition.”

The governor of Mehdi Shahr (located in Semnan province) told the IRGC affiliated news agency, Fars, yesterday, “The increasing trend of the number of people infected with the Coronavirus is extremely worrying.”

Today, Zahedan University of Medical Sciences Vice-Chancellor told the state-run daily, Rouze-e Now, “May was the peak of Coronavirus disease in Sistan and Baluchestan. 40% of deaths took place in May … Certainly, the number of infections in Najafabad Khash area will increase significantly in the coming days.”

“172 new patients have been admitted to ordinary units and 61 to ICUs in the last 24 hours… The figures show a slight increase compared to the previous days, and the downward slope has stopped today,” Alireza Zali, head of the National Coronavirus Combat Taskforce (NCCT) in Tehran told the state TV today, adding: “We had a sudden surge in many cities that were in a low-risk situation… The situation in Khuzestan may be repeated as a bitter scenario… in every city.”

At the same time, Eghtesad Saramad daily today wrote, “The impoverished class is the main conduit to transfer the virus. As mobile carriers, they will be present everywhere because if they do not work daily, they will die from starvation. For them isolation and quarantine are meaningless; it makes no difference whether they die from the Coronavirus or from hunger.”

Another state-run daily, Hamdeli also wrote today, “Based on recent assessments, the poverty line for a four-member-family has reached 9 million Tomans. Considering that the minimum wage for a large segment of Iranian families, whether employees or workers, is 2.8 million Tomans, there is a six –million-Toman gap between what employed citizens receive and the poverty line across the country.”

Mrs. Maraym Rajavi, the President-elect of the National Council of Resistance of Iran (NCRI), said, While the backs of working people and deprived citizens are bent under the weight of poverty and the Coronavirus, Rouhani claims that the country has been making progress step-by-step in the past three months and that there has been no relapse anywhere. No-one takes the preposterous claim by the regime’s president seriously. He has founded the Party of Lies.

Previous articleIRAN and IRAQ – TWIN REBELLIONS
Next articleLatest News in Brief – May 21, 2020