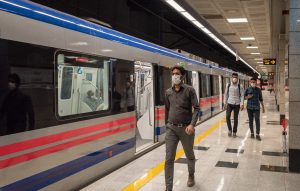 Regime’s Health Ministry: 3,117 new cases in the past 24 hours, fourfold increase in one month, roughly equal to highest in the country in past three and a half months

Today, a spokesman for the mullahs’ Health Ministry said, the death toll had risen to 3,117 in the past 24 hours, a fourfold increase from a month ago, almost the same as the peak days, three and a half months. According to the regime’s Health Ministry, the highest number of patients in 24 hours on March 30, 2020, was 3,186.

In Khuzestan, a spokesman for Ahvaz University of Medical Sciences quoted by the state-run daily, Aftab news, yesterday announced, “683 new cases of infection and the deaths of 14 patients in the past 24 hours.” The head of the Razi Hospital in Ahvaz told the state TV, today, “In addition to Razi Hospital, Fatemeh Zahra, Monfared Niaki, Amir Al-Momenin, and the old Ayatollah Taleghani Hospitals in Ahvaz are also accepting Coronavirus patients.”

The head of Abadan University of Medical Sciences, quoted by the official news agency ISNA, emphasized yesterday, “the number of emergency patients in all cities in southwestern Khuzestan has increased” and said, “Decisions may be made for forced quarantine in homes.” The governor of Abadan told the IRGC affiliated news site, Javan yesterday, “We did not have any cases of Coronavirus for many days. But now, these numbers are two and even three-digit.”

Meanwhile, the Nursing Deputy of the Health Ministry told the state-controlled news agency, Arya, yesterday, “Currently, Khuzestan Province is facing a severe shortage of specialized nurses. In the precinct of Ahvaz, Abadan, and Dezful Universities of Medical Sciences, there are many problems … The lack of human resources, especially the specialized nursing force, is the most important of which. This shortage is strongly felt.”

Yesterday, Kurdistan’s deputy governor told the IRGC affiliated news agency, Fars, “The situation of Coronavirus outbreak in Kurdistan province, especially in the city of Sanandaj, is red and alarming.” At the same time, a faculty member of Kurdistan University of Medical Sciences was quoted by the state-run daily, Hamshahri, saying, “The number of Coronavirus patients in Kurdistan has increased significantly.”

In Hormozgan, according to ISNA, today, the President of Hormozgan Azad University said, “We are facing a 10 to 15-fold increase in the number of people with Coronavirus in Hormozgan Province compared to the early days of the outbreak.” Yesterday, Hamshahri, quoted the head of Bandar Abbas Health Center, describing “the condition of Coronavirus infection in Hormozgan Province and Bandar Abbas as hazardous.” According to the official news agency, Mehr, yesterday, the President of Hormozgan University of Medical Sciences “regretted the rapid rise of infection in the Province” and said, “The number of definite cases of Coronavirus in Hormozgan has reached 4,017”. The governor of Minab was also quoted by Mehr today, saying, “Unfortunately, the situation in Minab has turned from hazardous to a serious alarm and red.”

According to the state TV on June 1, 2020, the University of Medical Sciences in Kermanshah announced “159 new cases,” and “the death of four people in Kermanshah Province due to the Coronavirus.” It also reported that 241 people are currently hospitalized. Fars news agency, June 2, quoted the head of Golestan Hospital in Kermanshah saying, “There is a great sense of danger about the outbreak of the disease in the Province, especially in the city of Kermanshah.”

In West Azerbaijan, the president of the University of Medical Sciences told Javan news site, today, “In the past month, the number of Coronavirus patients in Mahabad has been rising steeply and alarmingly.” He was also quoted today by the state-run Khabar online, adding, “Statistics of Coronavirus patients in the Province on May 31 with the registration of 229 cases was the highest daily rate since the beginning of the outbreak.” Vice president of the university told Fars news agency today, “In the past few days, the state of people visiting Taleghani Hospital in Urmia was worse, and the number of critically ill is on the rise. Yesterday, 12 out of 64 patients admitted, were directly transferred to the ICU, which alerts the critical state of the disease outbreak.”

ILNA news agency quoted the governor of Neyshabur saying: “Statistics show that the number of Coronavirus deaths in the city has increased by 50% in the last ten days of May compared to the same period in the previous month.”

In Zanjan, the governor announced that “the city of Zanjan is currently red,” reported Hamshahri, June 2.

Previous articleWhile Iran Downplays Past Abuses, More Crimes Against Humanity Could Be Looming
Next articleLatest News in Brief – June 3, 2020

IRGC's Commander terrified of an uprising: "With the re-emergence of Coronavirus, we will use all efforts to manage and control the consequences." At least...
Read more
Search