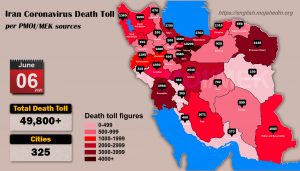 · In Dezful, 100 medical staff have contracted Coronavirus, 12 are doctors.

· Member of the NCCT: About 20% of the country’s population is infected with the disease and at least 40% to 70% will be infected.

· Rouhani: It is not the right thing to do when the counter-revolutionaries continually propagate that everything should be locked down; and some of our media outlets that are short of content, repeat their calls from the night before. Saying things like, ‘the second or third peak has started’ will cause chaos. We shouldn’t contribute to frustration and anxiety among the people.”

While the Coronavirus is taking more and more lives across the country every day, today Rouhani continued with his lies at the National Coronavirus Combat Taskforce (NCCT) meeting, saying that in science and research, “We are ranked first in the region and the Islamic world … and today many Iranians and non-Iranians are waiting in line to come to Iran for treatment.” However, he inevitably acknowledged that “this is an enduring epidemic, and we do not have a clear end to it.” To cover up the regime’s criminal role in forcing people back to work, he immediately said “the community gatherings such as weddings, funerals, and tribal and ethnic gatherings,” are to blame, adding, “It is not the right thing to do when the counter-revolutionaries constantly propagate that everything should be locked down and then some of our media outlets that are short of content, repeat their calls from the night before.” He added, “We should not cause anxiety and concern among the people by saying the second and third peak is here. ”

Alireza Zali, the head of the NCCT in Tehran, told the state news agency, Daneshjo, yesterday: “Certainly a new wave of Coronavirus is taking shape in Tehran. In the past 24 hours, the number of outpatients and inpatients has increased by 7.9 and 10.1 percent, respectively. Comparing this with the numbers for previous days shows an increase in Coronavirus patients.”

Yesterday, the FARS news agency reported that in Hormozgan, the prevalence of Coronavirus is becoming more widespread every day. The president of Hormozgan University of Medical Sciences said, “333 new cases have been added to patients with Coronavirus in Hormozgan, increasing the total number of patients to 5,019 … Unfortunately, nine people with Coronavirus died in Hormozgan today, including two men (38 and 34) and a 25-year-old woman who had no previous diseases. The state-run news agency, IMNA, quoted a member of the so-called Islamic Council of Bandar Abbas as saying, “The Coronavirus infections in Bandar Abbas has grown by several times in two weeks, and if the situation continues like this, the city’s facilities will no longer be able to respond and control the current situation. The officials’ culpability becomes heavier when they blame the people’s negligence for the rise in fatalities and infections, while they have not taken any effective measures to deal with the spread of the disease.” Yesterday, the Quds Force news agency, Tasnim, reported a 200 percent increase in the number of patients in Qeshm Island and wrote, “‌Bandar-e Jask will be subject to severe Coronavirus restrictions from Saturday, June 6.”

Reporting from West Azerbaijan, Mehr state-run news agency quoted the president of the University of Medical Sciences saying yesterday, “By identifying 303 new patients with Coronavirus in one day, the Province set a record for the number of people with the disease. In the second peak, the figures increased, and patients coming in were in a worse state compared to those in the first peak; more people needed ICU services. Towns and cities in the red state include Sardasht, Urmia, Mahabad, Miandoab, Salmas, and Khoy.”

Meanwhile, the state-run daily, Aftab-Yazd criticizing Rouhani and his officials today, wrote, “As in previous cases and problems, the people are blamed and questioned as to why they did not observe social distancing or why they came to the streets? But, no one is saying why the quarantine was lifted so soon? If it were necessary for the poor and low-income groups to end the quarantine, would it not have been possible for the government to aid these groups for three or four months?”

It is worth mentioning that Mrs. Maryam Rajavi, the President-elect of the National Council of Resistance of Iran (NCRI) reiterated on May 29: Living expenses of the toilers and the deprived people could have been easily provided for by major economic and financial institutions under the control of Khamenei and the Revolutionary Guards so that they would not need to go to work for a few months and there would have been no need to send people to the altar of Coronavirus.