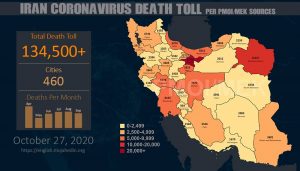 For the first time, the number of infected in 24 hours reaches 7,000 and critically ill patients 5,000, according to official figures

The spokesperson for the regime's Health Ministry: The average Coronavirus death rate in Iran has reached 40 people per million last week. The...
Read more
Statements

Khamenei, Rouhani, Zarif and Alavi must face justice for four decades of terrorism. A necessary and deterrent measure against godfather of international terrorism. The...
Read more