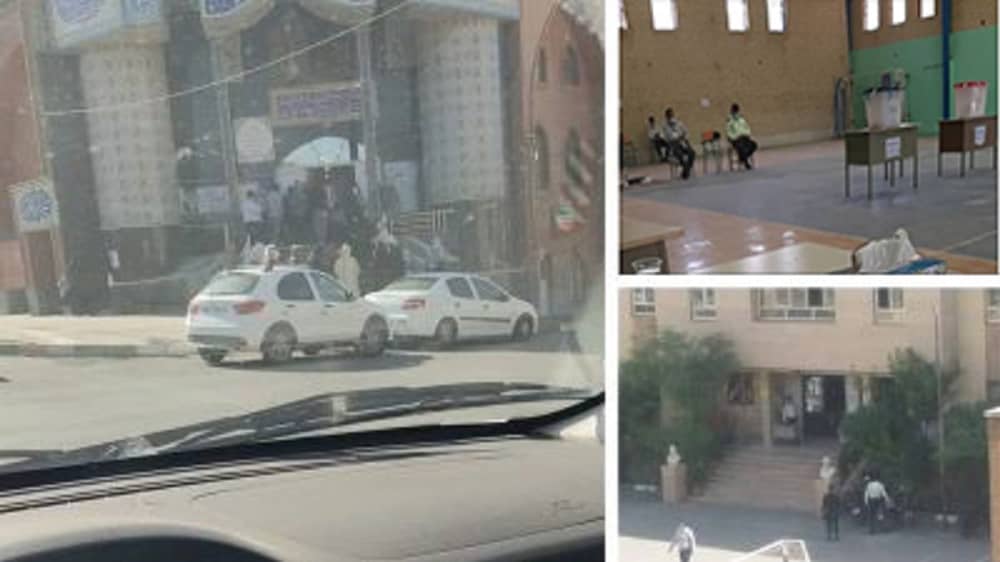 Reports from Tehran and various cities across Iran until 12:00 PM local time indicate an unprecedented boycott of the sham election taking place in the country today.

Regime officials have resorted to various ruses to stage-manage artificial crowd sizes at polling stations. For example, in Mashhad, they are distributing free food in the religious Shrine of Imam Reza to film the lines as voting lines. In Falakeh Aab in Mashhad, they distribute free food to gather the poor to film the crowd and present it as voters lining up at polling stations.

In Karaj, according to one observer, they are offering 300,000 Tomans (local currency) for each vote. In the Shahriar suburb of Tehran, they distribute pens, masks, and hand gels for free at the Grand Mosque to attract people to the polling station there.

According to reports from within the regime, election officials have been ordered not to reveal voting participation statistics in their polling stations, and if they are forced to mention figures, they should multiply the actual figure by ten and announce that.  They have also received instructions to guard against invalid ballots that indicate the public’s protest to the vote and write ballots that are incomplete for one of the candidates whose name is closest to what is written on the ballot.

In another directive to election workers, they have been instructed to spend any amount of funds necessary to conduct propaganda to attract voters to the polling stations and not be concerned about the budget and that there is no budgetary limitation.

Election officials have also been instructed not to allow any filming of the vote by anyone but regime-accredited journalists. Even election officials are banned from filming at the polling stations they work. According to reports from Tehran, Kermanshah, and some other cities, members of the public who attempted to film the voting stations were arrested.

Previous articleIran News in Brief – June 18, 2021
Next articleIran Election 2021: Briefing on the Turnout in the Iran Regime Sham Presidential Election – No 1