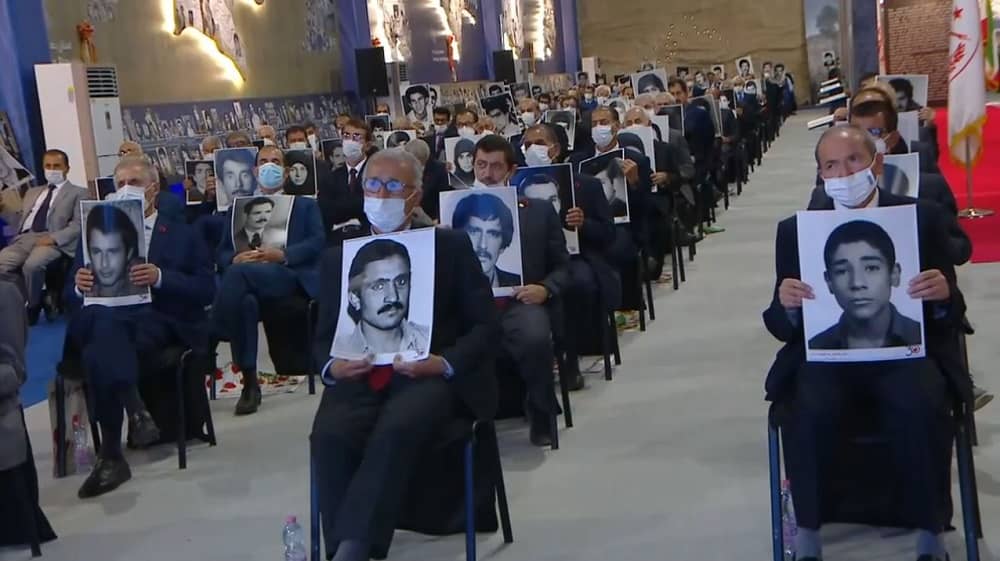 1988 Massacre and Genocide
No to Immunity, Yes to Accountability

In a conference coinciding with the 33rd anniversary of the 1988 massacre, more than 1,000 political prisoners and witnesses of torture in prisons and dungeons of the clerical regime demanded an end to the impunity enjoyed by the regime leaders and to prosecute Khamenei, Raisi, Judiciary Chief, Eje’i and other perpetrators of the massacre. During the 1988 massacre, based on Khomeini’s fatwa, the clerical regime executed at least 30,000 political prisoners, more than 90% of whom were Mujahedin-e Khalq (MEK/PMOI) activists. They were massacred for their steadfast commitment to MEK’s ideals and the Iranian people’s freedom.

Mrs. Maryam Rajavi, the President-elect of the National Council of Resistance of Iran (NCRI), and hundreds of prominent political figures, as well as jurists and leading experts on human rights and international law from around the world, participated in the conference. Some of the speakers of the conference included Guy Verhofstadt, Prime Minister of Belgium (1999-2008), Franco Frattini, Minister of Foreign Affairs of Italy (2008-2011), Giulio Maria Terzi, Italian Foreign Minister (2011-2013), John Baird, Canada’s Minister of Foreign Affairs ( 2011-2015), Audronius Ažubalis, Minister of Foreign Affairs of Lithuania (2010-2012), Kumi Naidoo, Secretary-General of Amnesty International (2018-2020), Dominique Atias, President of European Bars Federation from March 2021, Geoffrey Robertson, the first president of the UN Special Court for War Crimes in Sierra Leone, Eric David, Professor of International Law, Valeriu M. Ciuca, former judge of the European Court,  and Gulnara Shahinian, the UN Special Rapporteur on Contemporary Forms of Slavery (2008-2014). 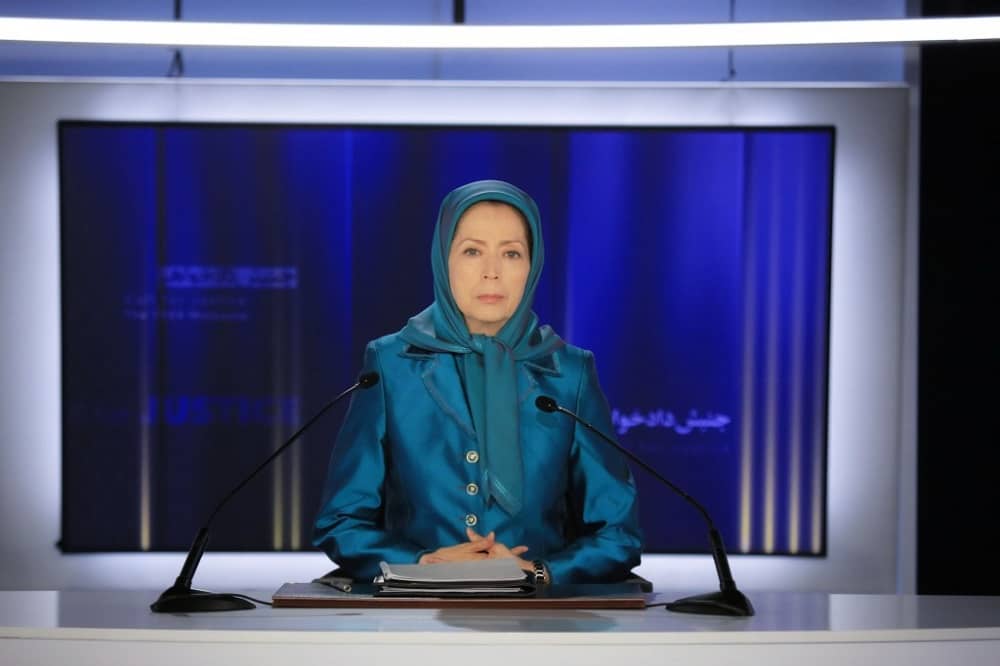 In her address, the President-elect Maryam Rajavi referred to some 1,000 political prisoners in attendance at the conference, who had been tortured under the dictatorships of the mullahs and the Shah, a quarter of women, and underscored: The clerical regime wanted to break and defeat every member and supporter of the MEK by torturing, burning, and flogging. It tried all evil, malicious, and inhuman tactics. They inflicted the most depraved tortures on the female MEK prisoners in the so-called “residential units.” They locked them in “cages” for weeks and months to break their spirit of resistance. Finally, in the summer of 1988, MEK members were offered a choice between death or submission coupled with renouncing their loyalty to the MEK. However, the generation that stepped into this path inspired by Massoud Rajavi (the leader of Iran Resistance) and longing for freedom resisted heroically in prisons, under torture, and in the harshest conditions. Even when they had to choose between surrender and execution, they courageously adhered to their principles: the overthrow of the clerical regime and the establishment of freedom for the people.

Mrs. Rajavi underscored: The 1988 massacre is a clear example of genocide. In January 2010, Ebrahim Raisi, the regime’s current president, declared that “All Mojahedin are enemies of God and punishable by death.” Therefore, the gathering of 1,000 MEK prisoners is a unique capital for the Call-for-Justice Movement and the Resistance movement that seeks to overthrow the regime… This extraordinary assembly is the tip of a great pyramid in Iranian society that consists of hundreds of thousands of tortured prisoners and families of 120,000 martyrs to the cause of freedom. Together with their comrades-in-arms in Ashraf-3, they form the Iranian people’s organized nationwide resistance beating heart.

Mrs. Rajavi said that the appointment of Ebrahim Raisi as president was an open declaration of war on the people of Iran and the PMOI/MEK, which is at the heart of the Iranian people’s army of freedom. Emphasizing that the Call-for-Justice Movement is not a spontaneous phenomenon, she added: For us, the Call-for-Justice movement is synonymous with perseverance, steadfastness, and resistance to overthrow this regime and establish freedom with all our strength. For this reason, denying the massacre, minimizing the number of victims, and erasing their identities is what the regime is seeking because they serve its interests and ultimately help preserve its rule. Concealing the names and destroying the graves of the victims serve the same purpose. How can one seek to destroy the MEK, crush their positions, values, and red lines, eliminate the Resistance’s Leader, and call himself a sympathizer of the martyrs and seek justice for them? This is the ploy of the mullahs’ intelligence services and the IRGC to distort and divert the Call-for-Justice Movement and undermine it.

The president-elect of the Iranian opposition called on the U.S. and Europe to recognize the 1988 massacre as genocide and crime against humanity. They must not accept Raisi in their countries. They must prosecute and hold him accountable, she added. Mrs. Rajavi also reinstated her call to the UN Secretary-General, the UN High Commissioner for Human Rights, the UN Human Rights Council, the UN special rapporteurs, and international human rights organizations to visit the Iranian regime’s prisons and meet with the prisoners there, especially the political prisoners. She added that the dossier of human rights violations in Iran, especially regarding the regime’s conduct in prisons, should be submitted to the UN Security Council. 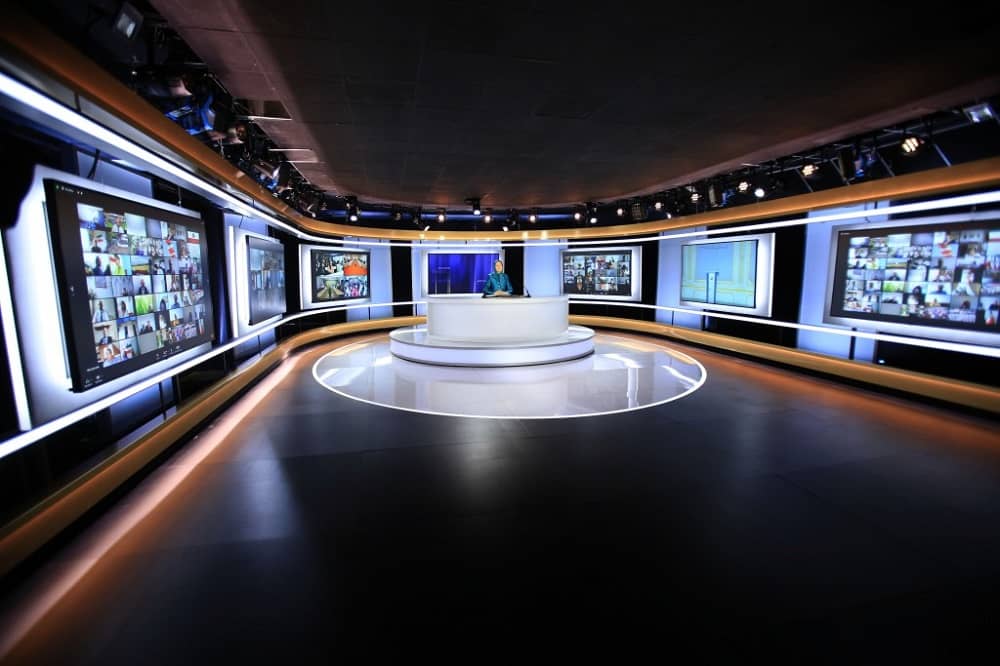 In his remarks, Geoffrey Robertson, First President of the UN Special Court for Sierra Leone, said: “It has been a crime to kill prisoners for centuries. The difference is that if it amounts to a particular crime of genocide, there is an international convention that binds countries to take action and punish that genocide.”
Referring to Khomeini’s fatwa calling for the annihilation of the MEK and calling them Mohareb (enemies of God) and used by the regime as the basis of the massacre, he reiterated, “It seems to me that there is very strong evidence that this was a genocide. It applies to killing or torturing a certain group for their religious beliefs. A religious group that did not accept the backward ideology of the Iranian regime… There is no doubt that there is a case for prosecuting [regime President Ebrahim] Raisi and others. There has been a crime committed that engages international responsibility. Something must be done about it as has been done against the perpetrators of the Srebrenica massacre.”

Kumi Naidoo, Secretary-General of Amnesty International (2018-2020), said, “The 1988 massacre was a brutal, bloodthirsty massacre, a genocide. It is moving for me to see the strength and courage of people who have been through so much and seen so much tragedy and endure these atrocities. I’d like to pay tribute to all the MEK prisoners and applaud you… The EU and broader international community must take the lead on this issue. This government, led by Raisi, has even greater culpability on the issue of the 1988 massacre. Governments that behave like this must recognize that behavior is not so much a show of force as an admission of weakness.”

Eric David, an expert on international humanitarian law, also confirmed the characterization of genocide and crimes against humanity for the 1988 massacre.

Franco Frattini, Foreign Minister of Italy (2002–2004 and 2008–2011) and European Commissioner for Justice, Freedom, and Security (2004–2008) said: “The actions of the new government of Iran are in line with the regime’s history. The new Foreign Minister has served under previous governments. There is no difference between conservatives and reformists. It is the same regime. This is confirmed by the Foreign Minister’s closeness to the commander of the Quds Force. He even confirmed that he would continue the path of Qassem Soleimani. Finally, I hope for an independent investigation with no limitation into the 1988 massacre. The credibility of the UN system is at stake. The UN Security Council has a moral duty. The UN owes this moral duty to innocent victims. Let us seek justice. Let us go forward with a serious international investigation.”

Guy Verhofstadt, Prime Minister of Belgium (1999 to 2008), said: “I am still shocked by what happened in 1988. The 1988 massacre targeted an entire generation of young people. It is crucial to know that this was planned in advance. It was planned and rigorously executed with a clear target in mind. It qualifies as genocide. The massacre was never officially investigated by the UN, and the perpetrators were not indicted. They continue to enjoy impunity. Today, the regime is run by the killers of that time.”

Giulio Terzi, Foreign Minister of Italy (2011 to 2013), said: “Over 90 percent of those executed in the 1988 massacre were MEK members and supporters. The prisoners chose to stand tall by refusing to renounce their support for the MEK. Many have called for an international investigation into the 1988 massacre. EU High Representative Josep Borrell should end his usual approach toward the Iranian regime. He should encourage all UN member states to demand accountability for Iran’s great crime against humanity. Thousands of people are out there who expect a more assertive approach by the international community, especially the EU.”

John Baird, Canada’s Foreign Minister (2011-2015), also addressed the conference and condemned the 1988 massacre. He, too, called for an international investigation into this crime against humanity.

Audronius Ažubalis, Minister of Foreign Affairs of Lithuania (2010 – 2012), underscored, “No one has yet faced justice for this crime against humanity. There is no political will to hold the perpetrators to account. A UN investigation into the 1988 massacre is a must. The European Union has ignored these calls, shown no reaction, and not been prepared to show a reaction. I want to call on the EU to sanction the regime for crimes against humanity. I think Lithuania can take the lead among EU members.”

Secretariat of the National Council of Resistance of Iran (NCRI)
August 27, 2021