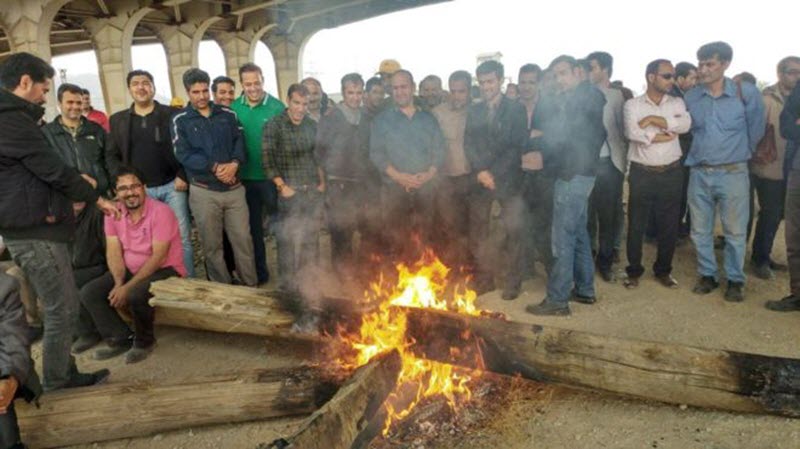 On Monday, May 14, the workers of the Heavy Equipment Production Company (HEPCO), Arak, stopped working for the second day in protest of the failure to get their arrears and their very harsh livelihood conditions and the failure to implement the deceptive promises of the government employer. The strikers closed the Arak railroad to Tehran and hung black flag at the entrance of the factory as a sign of mourning. Yesterday one of the workers in the factory who was so hurt by the pressures, intended to commit suicide but was saved by his colleagues.

With 42 years of experience, Hepco is the largest producer of road machinery in the Middle East that has been abandoned for extraneous imports and giving it to the regime’s officials and their families under the pretext of privatization.
Cane cutter workers of the Haft Tapeh sugar cane protested against the non-payment of their wages at the factory site. Most of them are from the deprived villagers in Khorramabad who have turned to heavy cane cutting work. But government employers, despite imposing these slavery terms and with the end of the cane cutting season, refuse to pay their wages.

At the same time, 1,000 workers and employees of the Cham Shir power plant and dam in Gachsaran protested for the third day in protest of not paying seven months of their salary and benefits.

On the same day, workers of the Traverse Railway Company of Mashhad went on strike in protest of failure to pay four months' salary and months of their insurance benefits and their poor livelihood status. Railroad workers in Islamshahr, Zanjan, Tabriz, Damghan and Bafgh refused to go to work the previous days.

Employees of the Shiraz Vegetable Oil Company, who have not received any pay for their work for four months, protested the hunger and the inability to provide their livelihoods by setting up an empty table on the street. They chanted of “Our table is empty, it is in support of Iranian goods”, mocking slogans of Khamenei, the corrupt and renegade leader of the clerical regime.