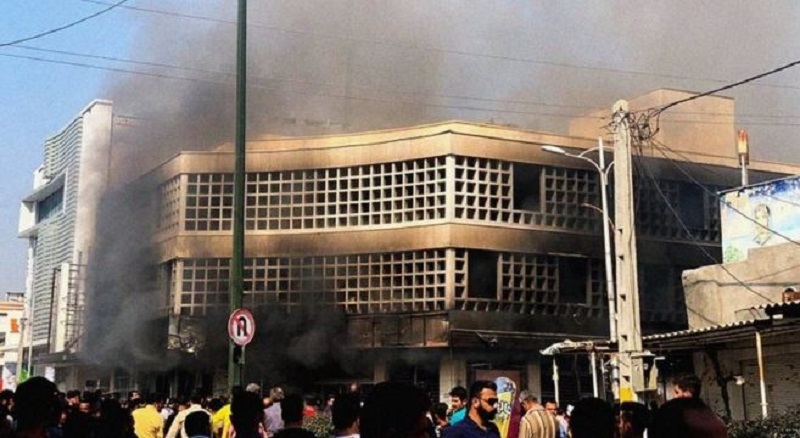 While regime officials try to depict themselves as firmly in control of the internal situation, they cannot conceal their fear and trepidation over the prospect of overthrow that has been caused by the people's recent uprising. One after another, they come to the scene, and while threatening more suppression they express anxiety over the unprecedented scale of the uprising.

On Saturday, November 23, the state-run IRNA news agency quoted the regime's security experts as saying: "Besides Tehran, Isfahan, Tabriz, and Ahvaz, the city of Shiraz had the most extensive movement by hooligans and those linked to the (People's Mojahedin Organization of Iran - PMOI/MEK). Thanks to the efforts of security and law enforcement forces" and "after the arrest of he main leaders of the movement associated with the PMOI" calm returned to the city. IRNA added: "The extensive scale of damages to banks, gas stations and urban infrastructure, the number of locations where clashes occurred and plans to cripple the city of Shiraz through the closure of critical arteries that provided access to outside of the city were all very dangerous and more expansive than in other cities."

On November 22, deputy commander of the Islamic Revolutionary Guard Corps (IRGC), Rear Admiral Ali Fadavi, implicitly mentioned that the IRGC was involved in the suppression of the uprising since the outset and said: "On the first day, 28 provinces were involved in the matter. ... For example, I was speaking to the IRGC commanders of some cities. In some instances, these riots reminded us of the Karbala-4 operation (during the Iran-Iraq war). ... We seriously fought for 48 hours straight." The Karbala-4 operation in 1986 marked one of the regime's biggest defeats during the unpatriotic war.

On November 21, the operations commander of the IRGC's paramilitary Bassij forces, Brig. Gen. Salar Abnoush, said: "There was an amazing and astonishing degree of coordination and they were only waiting for a spark in order to destroy the country. ... There was a delay in shutting down the internet but still it helped to disrupt the sophisticated organization of these groups. ... This was a different kind of sedition. ... As someone who was present on the scene, I believe that only God saved us."

According to state-run media on November 21, mullah Alireza Adyani, head of the ideological-political section of the suppressive State Security Forces (SSF), described the uprising as "more complicated than the incidents of 1999, 2009, and 2017," and said that the protests spread to "165 cities in 25 provinces of the country in a single day." He added that it "disrupted security in 900 locations of the country."

Mullah Rasoul Falahati, Khamenei's representative in the province of Gilan and the Friday prayer leader of the city of Rasht, described the protesters as "children of the executed PMOI" and "children of the PMOI in exile."