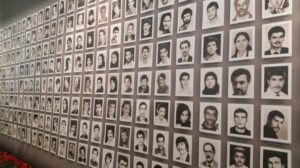 In an interview with the state TV, on June 2, 2020, Khomeini’s death anniversary, Ebrahim Raisi, the regime’s Judiciary Chief, and a member of the Death Committee during the 1988 massacre of political prisoners said, “Well, these [MEK] should not be given a chance … And people like martyr Assadollah Lajevardi [known as the butcher of Evin Prison] who knew the hypocrites (pejorative term regime uses to describe the Mujahedin-e Khalq- MEK) well, people like martyr Kachuei [the notorious Evin Prison warden] and many of these loved ones who knew the [MEK] well…These are the people that Imam shouldn’t have had any mercy on, and Imam [Khomeini] knew them well». In another part of his interview, Raisi added, “One meeting I attended with three or four of my friends to report on some of these cases to his eminence [Khomeini]. When we came out, we felt that … the Imam is more revolutionary than us. We had gone to report that we were doing these things, and feared that Imam would warn us against overdoing it … However, we realized that the Imam is many steps ahead of us, and not only he encouraged us, but also he said that you should follow these tasks seriously, and not only in Tehran but also in other provinces.”

The criminal Chief of the mullahs’ Judiciary, who is terrified of MEK’s popular support at home and on the international stage, reiterated, “Today’s youth do not realize who Mujahedin-e Khalq are. Because they’ve been presenting themselves respectably in Europe.” He added, “Sadly, the question is why after they were blacklisted in Europe and the United States, they were removed from the list due to political expediency, and now they are cooperating with them and sheltering them. We should get to know the hypocrites (MEK), just like the Imam had known them well.”

On June 1, 2020, the former criminal prosecutor and member of the regime’s Supreme Judicial Council during the 1988 massacre, Morteza Moghtadai, told the state TV, “There were many attacks at that time and they bragged about it a lot, saying why so many [MEK supporters] have been executed… An important point is that I don’t want to name the gentleman who was one of the religious icons and was our neighbor … He advised me to refrain from continuing the ongoing imprisonments and executions. I said God forbid; we obey the Imam [Khomeini’s] orders. … He said, yes say no to Imam! It’s not feasible to say no, tell him it’s not to our benefit to do so… I said I swear to the God, the Imam himself said to continue resolutely, [Imam said to execute] even those hypocrites [MEK supporters] that are firm in their beliefs, and if they are released from prison today, tomorrow they will carry on with their explosions. This was Imam’s instructions to us, and we acted according to his decision.”

The statements of the regime’s Judiciary Chief and its former prosecutor are clear admissions to their active participation in the crimes against humanity. They must be prosecuted and punished.

In a letter to Khamenei, the regime's Health Minister, Saeed Namaki, absolved himself of responsibility and wrote: "I had written to you, predicting...
Read more
Statements: Human Rights

Rouhani's ridiculous warning against "Coronavirus fearmongering" and ludicrous boast that Iran's situation is better than other countries Chairman of Tehran City Council: Up...
Read more
Search