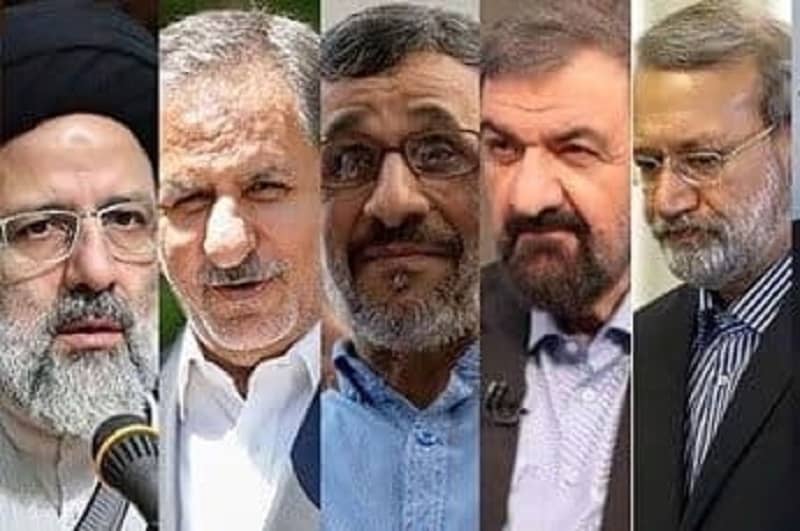 Ebrahim Raisi, Henchman of the 1988 massacre, murderer of MEK members and sympathizers, and one of the worst criminals against humanity
IRGC Brig. Ali Larijani, architect of censorship and suppression, war criminal, and responsible for institutionalizing crime and plunder

The candidates for the Iranian regime’s sham presidential election, such as henchman Ebrahim Raisi and IRGC Brig. Gen. Ali Larijani, Es’haq Jahangiri, Saeed Jalili, and half a dozen Revolutionary Guards commanders, have played a major role in murder and crimes against humanity, warmongering and war crimes, repression, censorship, terrorism, and plunder for the past 40 years.

Ebrahim Raisi is the henchman of the 1988 massacre, the murderer of the Mujahedin-e Khalq (MEK/PMOI), and one of the worst criminals against humanity. Raisi was appointed as the Assistant Prosecutor of the Karaj Revolutionary Prosecutor’s Office in 1980, at the age of 19. The following year, under the supervision of the cleric, Ali Quddusi, the regime’s Attorney General, Raisi was appointed as the Prosecutor of Karaj, and shortly thereafter as the prosecutor of Hamedan. In 1985, due to his active role in suppressing and killing the MEK members and supporters, he was appointed as the deputy to Ali Razini, the notorious Revolutionary Court Prosecutor in Tehran, and served as the director of division handling opposition groups. In July 1988, at the age of 28, Raisi was appointed by Khomeini as a member of the death commission in Tehran which carried out the 1988 massacre of thousands of political prisoners based on Khomeini’s fatwa.

On an audiotape recorded on August 15, 1988, and released in October 2016, Hossein Ali Montazeri, Khomeini’s designated successor, criticized the role of Raisi among others. He said: “It was the beginning of the month of Muharram (the first month of the Islamic calendar, which is one of the four sacred months of the year when warfare and killing is forbidden); I summoned Mr. (Hossein Ali) Nayyeri, (the sharia judge), Mr. (Morteza) Eshraghi, (the public prosecutor), Mr. (Ebrahim) Raisi (the then deputy prosecutor), and Mr. (Mostafa) Pourmohammadi, (representative of the Intelligence Ministry) and told them: ‘It’s now Muharram, at least stop the executions … The greatest crime in the Islamic Republic, for which history will condemn us, has been committed by you.’”

According to Tasnim News Agency’s report dated March 9, 2019, Khomeini wrote in a decree on January 1, 1989, “Your Excellency (Nayyeri) and Mr. Raisi will be given a judicial mission to review the reports of the cities from Semnan, Sirjan, Eslamabad, and Dorud. And regardless of administrative complications, carefully and quickly implement what is God’s command in these cases.” In a letter to the Supreme Judicial Council on January 21, 1989, Khomeini wrote: “All the cases about which the council has surprisingly remained idle, delaying the implementation of God’s judgment, must be given to Nayyeri and Raisi to carry out God’s command as soon as possible. More delay is not allowed.” (Khomeini’s portal)

In 2004, during Mahmoud Hashemi Shahroudi’s tenure as the Judiciary Chief, Raisi was appointed as his first deputy and the head of the General Inspection Organization. He held this position until 2014 during the first term of Sadegh Amoli Larijani as the Judiciary Chief. In 2014, he became the regime’s, Attorney General. In March 2016, Khamenei appointed him as the custodian and chairman of Astan-e Quds Razavi, one of the regime’s largest financial conglomerates and endowments with various holdings. Astan-e Quds Razavi is one of the main entities involved in astronomical looting and plundering of the Iranian people’s wealth and resources. Khamenei appointed Raisi as the Judiciary Chief in March 2019.

In the aftermath of the 2009 uprisings in Iran, in an interview with state television on December 27, 2009, Raisi called all protesters as “Mohareb” (enemies of God) who deserve to be executed, and said, “In the case of the organization of the Monafeqin (hypocrites-pejorative name used by the regime for MEK), anyone who helps the organization of the Monafeqin in any way under any circumstances, because it is an organized movement, the title of Moharebeh applies.” The US and the EU have sanctioned Raisi for his role in executions, human rights abuses, and the massacre of political prisoners.

IRGC Brig. Ali Larijani, established censorship and repression on the state radio and television from the beginning of the mullahs’ rule. In the early 1980s, he officially joined the Revolutionary Guards and served as the IRGC Deputy Chief Commander of IRGC, and Deputy Chief of Staff, and was actively involved in sending children to minefields and in committing war crimes. During Rafsanjani’s presidency, he was the Minister of Culture and Guidance, and subsequently, in 1994, Khamenei appointed him as the head of the State Radio and Television Organization.

Larijani has long represented Khamenei in the regime’s Supreme Security Council and served as its secretary from 2005 to October 2007, playing an active role in deceiving the international community about the regime’s nuclear weapons program. Since June 2008, for 12 years as the Speaker of the regime parliament, he provided legalized and institutionalized crimes and looting. IRGC Brig. Jafari Sahraroudi, one of Larijani’s closest advisers, assassinated Abdolrahman Ghassemlou (Secretary-General of the Kurdistan Democratic Party of Iran) in Vienna in 1989. Sahraroudi was wounded and arrested but was returned to Iran by the Austrian government. Larijani and his brothers, who have held top state positions for the past 40 years, have been involved in massive plunder, and embezzlement.

Secretariat of the National Council of Resistance of Iran (NCRI)
May 15, 2021

Previous articleIran Election in Brief – May 15, 2021
Next articleIran: Coronavirus Fatalities In 541 Cities Exceed 289,200