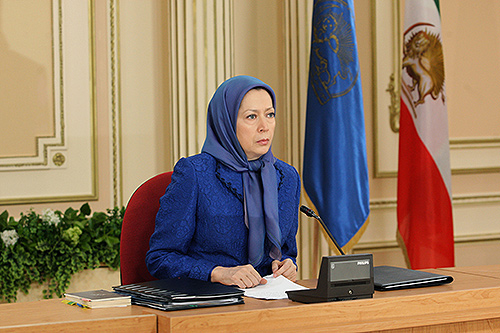 Maryam Rajavi: Circumventing six UN Security Council resolutions, an unsigned agreement will not close the mullahs’ path to deception and access to nuclear bomb, but the ‘chalice of nuclear poison’ and Khamenei’s retreat from his red lines will shatter his hegemony and undermine the entire regime

NCRI – Despite many shortcomings and unwarranted concessions to the mullahs, the nuclear deal struck between P5+1 and the Iranian regime represents a reluctant retreat by Khamenei and a violation of red lines upon which he had repeatedly insisted over the past 12 years, including in recent weeks, said the Iranian Resistance’s President-elect Maryam Rajavi.

Mrs. Rajavi reiterated that circumventing the six UN Security Council resolutions and an unsigned agreement, which lacks the requirements of an official international treaty, would neither block the mullahs’ pathways to deception nor their access to a nuclear bomb. Nevertheless, as the Iranian Resistance had pointed out, such a retreat will shatter Khamenei’s hegemony (within the regime) and weaken and undermine the ruling religious fascism in its entirety, she added.

Recalling that the Iranian Resistance was first to expose the clerical regime’s clandestine nuclear projects and facilities during the past three decades, Mrs. Rajavi added: Khamenei and his regime capitulated to this agreement out of concern over Iranian society’s explosive state, the debilitating impact of the sanctions, their impasse in the region and the prospects for a toughening in the terms of the agreement by the U.S. Congress.

Another important point, Mrs. Rajavi noted, is that the money poured into the regime’s coffers must be placed under strict United Nations monitoring to ensure that it addresses the Iranian people’s urgent needs, especially the unpaid meager salaries of workers, teachers, and nurses, and is used to provide food and medicine to citizens. Otherwise, Khamenei will use these funds to further the regime’s policy of export of terrorism and fundamentalism in Syria, Yemen and Lebanon as well as to fill the coffers of the Islamic Revolutionary Guards Corps.

It is the Iranian people’s right to know what they will get out of this agreement, upon which the mullahs’ president claimed their water, bread and environment depended, Mrs. Rajavi said. She added: Any agreement that disregards and fails to underscore the Iranian people’s human rights will only embolden the regime in its suppression and relentless executions, abuse of the rights of the Iranian people, and violations of the Universal Declaration of Human Rights and the United Nations Charter.

Addressing the Iranian people, who have been the prime victims of the ruling religious dictatorship and a majority of whom live below the poverty line while the regime spends billions of dollars of the nation’s wealth on its ominous nuclear program to maintain its grip on power, Mrs. Rajavi said: The time has come to hold the anti-Iranian regime accountable and to rise up to overthrow the mullahs’ illegitimate regime and establish a free, democratic and non-nuclear Iran.