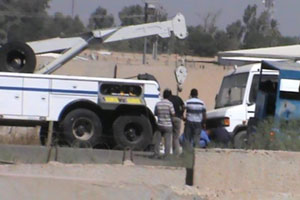 NCRI – Following massacre and mass execution of Camp Ashraf residents on September 1 and taking seven of them hostage by forces under Maliki’s command, stealing and plundering of Ashraf residents’ property by Iraqi forces continues.

In one example, on Thursday, September 26, Iraqi forces stole two trucks, two flatbeds, one minibus and an ambulance belonging to residents worth over $165,000.

About two months ago, these vehicles had transferred some of the residents’ needs from Ashraf to Camp Liberty, but despite constant requests by residents in Camp Liberty, Iraqi forces prevented their return to Ashraf.

After the transfer of the last group of members of the People’s Mojahedin Organization of Iran (PMOI/MEK) from Cam[ Ashraf to Camp Liberty, residents suggested that these vehicles be sold where they were at Camp Liberty, but instead of replying to this lawful request and without residents’ knowledge, Iraqi forces resorted to transfer and plunder these vehicles.

Picture shows transfer of these vehicles by the Iraqi police.

Secretariat of the National Council of Resistance of Iran
September 29, 2013