• Mrs. Maryam Rajavi: No one can possibly defend the idea that protection of a group of people be trusted in the hands of their murderers. This is illegal, irrational, immoral, inhumane and unacceptable 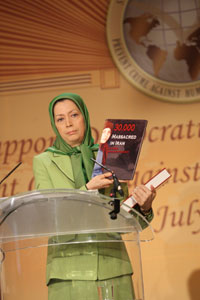 NCRI – On Wednesday, July 20, in an international conference in Paris, a panel of prominent European and U.S. politicians, together with scholars of international law discussed the responsibilities of the United States and United Nations regarding Ashraf. They stressed that clerical regime’s relentless attempts to annihilate Ashraf residents has converged activities to find a solution to this humanitarian crisis into an internationally urgent matter. The U.S. plan for relocating Ashraf residents inside Iraq was rejected in the conference as a plan that would pave the way for another humanitarian catastrophe.

Mrs. Maryam Rajavi, President-elect of Iranian Resistance, as the keynote speaker to the conference stated: Now that the power struggle at the of the Iranian regime hierarchy has intensified, and the Syrian dictator as the regime’s strategic ally, is on the verge of downfall, the Iranian regime is intent on destroying its organized opposition at any price and in any way possible.

Crimes and catastrophes in Ashraf take place under the pretext of Iraqi government’s ‘sovereignty’. How could possibly Ashraf residents be under the protection and responsibility of a government whose Chief of Armed Forces, Prime Minister, Interior Minister, Defense Minister, Minister of National Security, and Head of Intelligence are de facto the same man; The Prime Minister that together with his Commander of Ground Forces and other elements, are under judicial prosecution by the Spanish judicial system for committing two massacres in Ashraf. No one can possibly defend the idea that protection of a group of people be trusted in the hands of their murderers. This is illegal, irrational, immoral, inhumane and unacceptable.

In her finishing remarks Maryam Rajavi stated:  Yesterday, the United Nations General-Secretary, in his report to the Security Council, voiced his concern for the loss of lives in Ashraf saying: “I urge the Iraqi authorities to refrain from the use of force, and to ensure adequate access for camp residents to goods and services.”. He then adds: “ I therefore encourage all stakeholders involved to increase their efforts to explore options and seek a consensual solution that ensures respect for Iraq’s sovereignty while also being consistent with international human rights law and humanitarian principles. To this end, I call upon Member States to help to support and facilitate the implementation of any arrangement that is acceptable to the Government of Iraq and the camp residents.”

President-elect of the Iranian Resistance said that Ashraf residents accept all the observations put forward by the Secretary-General, in full harmony with what the UNSG has urged for.

At the end Mrs. Rajavi stated: “The key condition to succeed is for the United States to assume responsibility and to pay the minimum price for protection of the lives of innocent and defenseless people with each and every of whom it has signed a protection agreement until their final disposition.”

She outlined the following arrangements as realistic and feasible solution:

1. Expressing support by the U.S. and the EU for the European Parliament solution for resettlement of Ashraf residents in third counties;

2. Providing and guaranteeing Ashraf protection by U.S., EU and UN, especially the UNCHR and the UNHCR until resettlement of all residents is completed;

3. Permanent positioning of UN observers in Ashraf until the end of resettlement;

4. Investigation over the April 8th crime under the UN auspices to prevent recurrence of catastrophe;

5. Forcing the Government of Iraq to comply with the UNSC’s call to end use of force and violence, to end antihuman siege and psychological torture, and to move out armed forces from Ashraf.

Previous articleGeneral Hugh Shelton: I say, Wake up, State Department, take the MEK off the FTO list today
Next articleDemonstration about Camp Ashraf, outside of an EU foreign ministers meeting