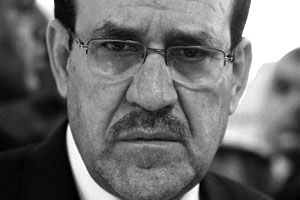 NCRI – According to information and documents obtained by the Iranian Resistance from inside the Iranian regime, Nouri al-Maliki personally monitors the issue of seven Camp Ashraf residents taken hostage and decides how and where to keep them.

According to these documents, which are presentable to any competent international court of law, at a meeting with a number of security officials in late September, Maliki ordered additional measures be adopted in order to keep secret the location of the seven Camp Ashraf hostages and to conduct other criminal behaviors against them.

Some of the measures which have been put on the agenda include: Changing the methods used for transferring the Camp Ashraf hostages from one location to another, regular and constant change of their detention centers, and rotating prison personnel, guards, and interrogators.

While emphasizing that these documents remove any doubts about the role of the Iraqi government and Maliki in the massacre and mass execution of members of the People’s Mojahedin Organization of Iran (PMOI/MEK) in Camp Ashraf as well as in the kidnapping of the seven residents on September 1, 2013, the Iranian Resistance urges the U.S. government and the UN to immediately intervene to put an end to this state-sponsored kidnapping, which is an blatant example of a crime against humanity, and to compel Maliki to release the hostages.

The Iranian Resistance reminds of the direct responsibility of the U.S. government and the UN regarding the safety and security of the hostages and underscores that silence in the face of crimes committed against humanity and state-sponsored kidnapping would be a disgrace for contemporary humanity. The Iranian Resistance is prepared to provide explanations and details to relevant U.S. and UN authorities with respect to the presence of the seven hostages inside Iraq.

Claiming lack of knowledge or denying the presence of these hostages in Iraq is merely a cover to justify inaction in the face of a great crime against humanity.

Secretariat of the National Council of Resistance of Iran
October 5, 2013

Previous articleMaryam Rajavi meets with Jean-Claude Mignon, President of the PACE
Next articleBerlin: Thousands of Iranians call on UN, US to save 7 Camp Ashraf hostages