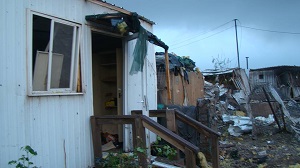 Camp Liberty under heavy attack – No. 13

Following the savage missile attack on Camp Liberty where 23 members of the People’s Mojahedin Organization of Iran (PMOI/MEK) were martyred and large sections of the camp was destroyed, Government of Iraq not only is not assisting in providing the immediate needs to the camp, but the Governmental Committee tasked to suppress Camp Liberty residents that operates under Faleh Fayyad and receives its orders from Tehran has intensified the antihuman siege on the camp in the past three days.

This antihuman treatment is despite the fact that in recent days the U.S. Secretary of State, the EU High Representative, the UN Secretary-General, the UN High Commissioner for Refugees, representatives of governments of Britain, Germany, Norway… Senator John McCain, the Democratic Leader in the U.S. House of Representatives and leaders of the Foreign Affairs Committee in the U.S. Congress, Amnesty International and other human rights agencies, and hundreds of legislators from all over the world have condemned the savage crime of October 29, called for tracking down its perpetrators and bringing them to justice, and urged that safety and security of PMOI members in Camp Liberty be secured.

In such circumstances, the suppression committee refused to allow residents’ food reefer to get into the camp and returned the vehicle. Given that many refrigerators and freezers have been destroyed in the missile attack, the residents need more foodstuff deliveries for their basic and imperative needs.

In another inimical step, the suppression committee prevented entry of sewage tankers rented by the residents for discharge of black water tanks in the past three days. This comes at a time where due to heavy rainfall in the days prior to the missile attack the discharge of tanks has become all the more imperative. Moreover, the black water tanks that are all dilapidated have become even weaker due to the missiles’ explosion waves and they rupture or overflow contaminating the camp’s environment and putting residents at the risk of infectious diseases.

On Saturday, October 31, the suppression committee prevented the entry and returned some basic items such as textile, nylon (to help waterproof damaged trailer and bunker roofs), and electric cables to reconnect electricity to sections cutoff by the missile barrage.

Prevention of entry of foodstuff and basic needs, especially following the missile attack, is flagrant violation of the Memorandum of Understanding that Government of Iraq has signed with the United Nations on 25 December 2015, as well as transgression of many international covenants, and a criminal act whose perpetrators should face justice and punishment.

By reminding the commitment of the international community regarding the security and wellbeing of Camp Liberty residents, the Iranian Resistance calls on the U.S. government, the European Union, and the United Nations to take immediate steps to promptly rescind the siege of Camp Liberty so that its residents could bring into the camp their imperative needs particularly after the missile attack. Removing the file and management of Camp Liberty from the hands of Iranian regime’s agents in Iraq is an imperative measure in order to prevent further humanitarian tragedies and to end the criminal siege on this refugee camp.