Four days after rainfall, Camp Liberty is still full of water and sludge 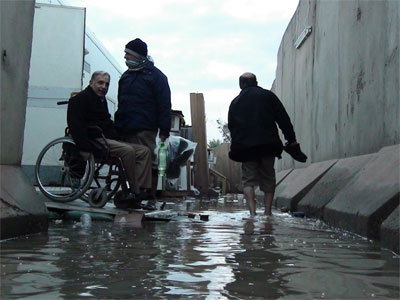 NCRI – Although four days passes since the rainfall on Tuesday, December 25, in Iraq, still in many parts of Camp Liberty, especially the southern and southwestern sections, water level is knee high and the land is full of sludge. Spread of the sewage in the camp and its mixing with rain water has greatly polluted the environment causing propagation of infectious diseases.
Since toilets and showers are generally in separate containers, residents have to pass through much water, sludge and sewage each time to reach them.
This is while until Saturday morning, December 29, residents have drained nine million liters of water with their limited tankers and other equipment. Iraqi forces stonewall drainage of water from Camp Liberty. In particular they prevent pumping of the water and sludge to outside the camp.
Meanwhile, the Iraqi government prevents transfer of essential items for these adverse conditions such as boots and other suitable shoes from Ashraf to Camp Liberty. Two containers of belongings of groups four and five worth $120,000 are being held by Iraqi forces since last April and May without any reason and despite repeated promises by Martin Kobler and UNAMI, Government of Iraq refuses to release them. Likewise up to this point, ten flatbed truck-loads of residents’ property that the SRSG promised their transfer in his 3 October 2012 letter have not been transferred under fictitious pretenses.
Current conditions once again demonstrate that Camp Liberty’s infrastructure fall badly short of humanitarian standards despites all efforts and expenses on part of residents in the past ten months and that Mr. Kobler’s objective in claiming Camp Liberty’s adherence to humanitarian standards on 31 January 2012 was aimed at deceiving Ashraf residents and making them homeless.
Once again, on December 26, residents of Camp Liberty requested to return to Ashraf.

Secretariat of the National Council of Resistance of Iran
December 29, 2012