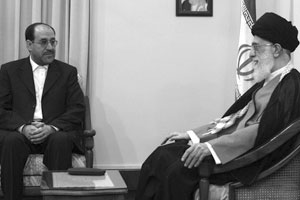 In his meeting with Nouri al-Maliki, Ali Khamenei commended him for the attack on Ashraf and tasked him with expediting ending PMOI dossier

NCRI – Based on documents and reports obtained from inside the Iranian regime, Khamenei commended Nouri al-Maliki in his meeting with him on 5 December 2013 for the attack on Ashraf and mass murder of the PMOI members.

He tasked Maliki with increasing pressures and attacks on the Liberty residents and to provide further facilities and freedom of action for the IRGC and the Quds Force in Iraq. He told Maliki to put an end to the PMOI dossier in Iraq as soon as possible.

Reiterating that the September 1st attack on Ashraf has had very positive results for both countries, Maliki committed himself to fulfill Khamenei’s orders in this regard.

Khamenei also ordered Maliki in the meeting to carry out military expedition to Anbar province and to cleanse there. He stressed that the Iraqi government must “fight against terrorism in al-Anbar” and “to wrap up the sit-in sites”. Maliki expressed his full readiness for this mission, but stressed his need of Iranian regime’s comprehensive support in this regard. Khamenei underscored his support for him in this fight including providing him with sophisticated weapons and intelligence support as well as the Quds Force commanders’ help for planning and commanding the attack.

Khamenei presented a report on his trip to the United States and his meeting with the U.S. President and officials. Khamenei said in this regard that the GOI should not rely on the U.S. whatsoever, and “the future of Iraq will be guaranteed in relation with Iran and Syria.” Maliki emphasized that the Iranian regime is the main support for the GOI, and protection and survival of Shiite rule in Iraq can be sustained only by relying on the Iranian regime and the Supreme Leader. Thereby, he is asking for expansion of military, security and economic cooperation with the Iranian regime.

While appreciating Maliki’s and his government’s full support for Bashar Assad, Maliki asked for heightening of Iraq’s support to Syria and providing further facilities for transferring troops and weapons from Iraq’s land and air to Syria. He emphasized Bashar Assad’s military achievements before Geneva II conference and said that Bashar Assad’s victory is necessary for Maliki to continue his post as prime minister after the April elections.

Secretariat of the National Council of Resistance of Iran
January 20, 2014