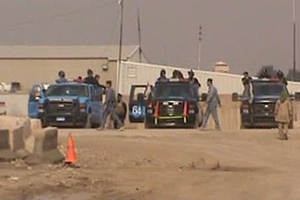 Iraqi forces stationed in Camp Liberty, which houses thousands of members of the People’s Mojahedin Organization of Iran (PMOI/MEK) in Iraq, On Monday and Tuesday, June 29 and 30, 2015 continued refusing to allow delivery of basic necessities purchased by the residents which have been held at the camp entrance since two weeks ago.

Preventing entry of items that include ventilators and Spare parts for camp’s ice-making machines has already created much problem for the residents living in temporarily metal trailer units in the hot summer weather conditions.

The Iraqi forces who refuse to hand over the items work on the order of an Iraqi governmental committee which is controlled by Iraqi National Security Advisor Faleh Fayyad.

The residents and their representatives have constantly taken up the issue daily with UNAMI monitors and have protested the logistical siege of the camp, but no effective measures have been taken.

Depriving residents of basic human needs is a violation of humanitarian and human rights standards, as well as many international covenants, and a criminal act meriting prosecution.
The Iranian Resistance calls on the United Nations and the U.S. government that have repeatedly and in writing committed themselves to the wellbeing and security of Camp Liberty residents, as well as the European Union and its member states, to adopt immediate measures to end this antihuman siege.

Secretariat of the National Council of Resistance of Iran
July 2, 2015