Maryam Rajavi: As a gesture of goodwill, the residents of Ashraf will commence the 6th convoy 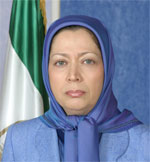 It is anticipated  that US will publicly reiterate its commitments to the approach to delisting outlined by Secretary Clinton, safety and security of the residents and a real effort to resolve the humanitarian issues

Mrs. Maryam Rajavi , President-elect of the National Council of Resistance of Iran declared: As a gesture of goodwill, the residents of Ashraf will commence the 6th convoy of 400 residents from Camp Ashraf to Camp Liberty on August 23.
She added: The residents anticipate and expect that the completion of convoy 6 will be followed by a public statement by the United States Government that recognizes the cooperation of the Ashraf residents and reiterates continued U.S. commitment to:
(i) the approach on FTO designation and  delisting outlined by Secretary Clinton on February 29, 2012, recognizing that the decision of US Court of Appeals for the D.C. Circuit requires the Secretary of State to make a determination regarding the FTO designation of the PMOI (MeK) by October 1, 2012;
(ii) a real effort to resolve the remaining humanitarian issues at Liberty that materially affect the daily lives of the residents, including sustainable mechanisms to provide water and electricity; and

(iii) support the safety and security of the residents until they relocate to third countries outside of Iraq, in mindfulness of the fact that this universally desired outcome cannot happen expeditiously without delisting.

Secretariat of the National Council of Resistance of Iran
August 17, 2012