Mrs. Rajavi accepts and welcomes the UN proposal for dialogue with the Government of Iraq in order to provide minimum guarantees for the transfer of Ashraf residents to Camp Liberty in the context of UNHCR statement 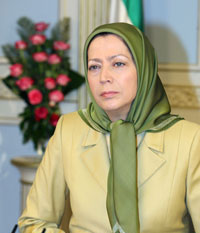 Mrs. Rajavi recalled her readiness to travel to Baghdad to talk with the Government of Iraq in the presence of the Special Representative of the UN Secretary General, reiterated the readiness of 400 Ashraf residents to move to Camp Liberty with their vehicles and moveable properties and called for the formation of a joint judicial committee of lawyers of all pertinent parties to sign a comprehensive document on the minimum guarantees for the transfer

NCRI – Mr. Martin Kobler, the Special Representative of the United Nations Secretary General (SRSG), Ambassador Daniel Fried, the Special Advisor of the U.S. Secretary of State on Ashraf, and Mr. Hugues Mingarelli on behalf of the high representative of the European Union for Foreign Affairs and Security Policy, held a joint press conference on Camp Ashraf in Brussels this afternoon. Mr. Kobler suggested that constructive dialogue be held between the representatives of the Government of Iraq and Ashraf residents to clarify the modality of the transfer to Camp Liberty and moving of the first group of the residents. Yesterday, the United Nations Refugee Agency, (UNHCR) issued a statement on determining the refugee status of Ashraf residents, stipulating that the Government of Iraq has prevented the commencement of the process in Ashraf. It pointed out: “UNHCR attaches utmost importance to peaceful solutions being found, including that any relocation outside Camp New Iraq proceeds on a voluntary basis, with freedom of movement the most desirable state at the site of relocation. UNHCR is currently looking at how to expedite verification and RSD processing so as to enable it to be done on an individual basis fairly, fully but also speedily, in the interests of gaining time against tight deadlines”.

The MoU signed on December 25, 2011 by Mr. Kobler, and the Government of Iraq explicitly says: GOI ensures “The transit locations meet humanitarian and human rights standards”, whereas nobody has yet certified these standards in regard to Camp Liberty.

Mrs. Maryam Rajavi, the President-elect of the National Council of Resistance of Iran, while recalling the NCRI’s February 1 and 2 statements concerning the condition of Camp Liberty and the lack of humanitarian and human rights standards, welcomed the suggestion by SRSG about starting a constructive dialogue between parties, in the context of UNHCR statement.

She recalled her readiness to travel to Baghdad and holding talks with the Government of Iraq in the presence of the SRSG, and as a good will gesture, again reiterated the readiness of 400 of the Ashraf residents to move to Camp Liberty with their vehicles and moveable properties. She called for an international conference or at least the formation of a joint judicial committee by lawyers of all pertinent parties to sign a “comprehensive document to arrange the transfer” which would entail the minimum humanitarian and human rights guarantees.

During the Brussels press conference, Ambassador Daniel Fried, citing the December 25 statement of Secretary Clinton, again, reiterated the U.S. responsibility and commitment to a peaceful solution and to prevent violence and another massacre at Ashraf.

While again expressing her appreciation for the attention Secretary Clinton has accorded to this issue, Mrs. Rajavi called on Ambassadors Fried and Kobler for guarantees and the implementation of those guarantees for the transfer of Ashraf residents to Camp Liberty. She specifically emphasized the need for the Iraqi forces to be stationed outside the 0.05 km2 area of the Camp so as to ensure the safety and well-being of some 1,000 female residents.

She added: The representatives of the residents have raised this issue on several occasions in their correspondence with the SRSG. Unfortunately minimal attention has been paid to this as well as to other “humanitarian and human rights standards” that the Government of Iraq had committed itself to in the MoU.

Secretariat of the National Council of Resistance of Iran
February 2, 2012