New details on plan for electronic suppression and espionage against Ashraf 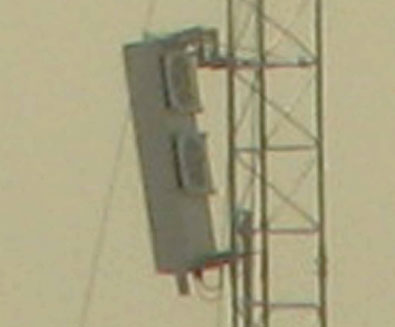 Military Occupation of Camp Ashraf – No. 141

NCRI – In statement ‘Military Occupation of Camp Ashraf – No. 137’ of 27 August 2011, the Iranian Resistance declared that the clerical regime’s Intelligence Ministry and terrorist Qods Force have resorted to installing two tall communication poles south of Ashraf to spy, fabricate dossiers, and issue bogus decrees against Ashraf residents. This measure was implemented through complete assistance from Iraqi forces. Now, the Iranian Resistance has received new details of this conspiracy from inside Iran and while disclosing it for public information, it calls for urgent interference from the U.S. and the UN to prevent continuation of this illegal and suppressive measure.

1. The MOIS presented the project of installing these poles under project title: “Espionage and Electronic Suppression” of Ashraf to Iranian regime’s Supreme National Security Council (SNSC). The project was approved by the council at the presence of Qassem Solaymani, Commander of Qods Force. Installation of these poles is taking place while it is 19 months that day and night psychological torture of Ashraf residents with 300 loudspeakers is continuing.

2. The MOIS has purchased the electronic equipment through “Ofogeh Tose’eh Saberin Engineering Co.”, one of the companies that belongs to IRGC cooperative. Previously, during the 2009 uprising, the clerical regime imported similar equipment from Germany, Britain, China, Malaysia, Dubai and Singapore to interfere in the satellite stations. These equipments have for example been installed on Milad Tower, Ekbatan Township and Dar-Abad in Tehran and Shahin-shahr in Isfahan. The equipment installed south of Ashraf and those installed in the above sites are completely similar (pictures are attached).

3. Clerical regime’s embassy in Iraq coordinated this project with Haqi al-Hakim and Sadeq Mohammed Kazim from the Iraqi Prime Ministry Committee tasked to suppress Ashraf residents. This committee ordered Captain Ahmed Hassan Khozair, its absolute representative in Ashraf, to prepare everything to advance this project.

4. In mid August, a technical team from MOIS was dispatched from Tehran to Baghdad to install the equipment. This team was stationed in Hotel Mohajer of Baghdad which is under the control of MOIS. This team accompanied Ahmed Khozair on August 10 and they visited Ashraf’s perimeter to pick suitable site for the installation of the poles. Subsequently, the poles were installed on August 24, 400 meters apart and 100 meters from Ashraf’s southern fence.

5. Prior to the installation of the poles, Ahmed Khozair ordered forces under the command of Nuri al-Maliki not to interfere in any way with the work of this team and not to even ask for their names or any other information. They should just provide logistical support and assistance. Elements of the MOIS covered their faces with masks and clothing during the installation of the poles and the equipment so as not to be identified.

6. Forces under command of Nuri al-Maliki used the Engineering equipment of Iraqi Army 5th Division to set up a complete facility composed of trailer and other necessary facilities and to put up a berm around each pole site. Facilities for these two sites, including two generators each worth tens of thousands of dollars, were stolen from the buildings occupied on April 8 north of Ashraf.

7. Radiation of these equipments, especially at close distances, leads to various blood, brain, nerve and internal gland diseases. Hence, their installation in Tehran has raised many protests even within the regime itself which led to uninstalling the equipment on Milad Tower. This issue was raised during the disputes of internal factions of the regime and found its way to the parliament as well where the Minister of Communication was questioned on them. The minister responded that he is unaware of the issue and that the issue relates to security organs. Subsequently, the representatives were warned not to interfere in the case.

The religious fascism ruling Iran, while spreading its suppressive and espionage measures against Ashraf and preparing the grounds for next massacres, is attempting to prevent the world public from learning of its anti-human crimes.

The Iranian Resistance calls on the Iraqi parliament and all nationalistic and democratic forces in that country, together with the head of the Supreme Judicial Council and the Iraqi Attorney General to protest this illegal and suppressive measure. It urges the U.S. government and the United Nations to ensure the protection of Ashraf residents and to station permanent UN observers in Ashraf.

Secretariat of the National Council of Resistance of Iran
September 4, 2011

Previous articleDisclosure of document: al-Maliki’s instruction for April 8th attack on Ashraf
Next articleUprising in Tabriz and Urumieh