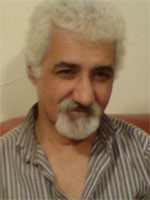 NCRI – On Wednesday, May 19, the clerical regime, during a kangaroo court, tried Mr. Hamid Haeri, a 60-year-old political prisoner, on charges of “moharebeh” (waging war against God), supporting the People’s Mojahedin Organization of Iran (PMOI/MEK), persistent political activity and propaganda against the regime. He was arrested in a raid on his house by the regime’s intelligence agents on December 6, 2009 on charges of visiting his child and brother in Camp Ashraf, Iraq. The raid took place while he was in bed recovering from a serious car accident.

He was then transferred to Ward 209 of Evin prison.

The regime’s interrogators and torturers have placed Mr. Haeri under continual physical and psychological torture, threatening him that if he refuses to comply with their demands, they will also arrest his wife and daughter and place them under torture.

The regime’s show trial took place even as Mr. Haeri was in critical condition and could hardly walk. There were signs of torture evident on his face, and he looked to be suffering from malnutrition and hunger. Having been a prisoner in the 1980s, he is also suffering from the remaining effects of tortures from that period as well as heart problems. He has had two heart attacks so far.

Despite intolerable physical complications, his firm stance, resistance, and high morale drew the ire of the henchmen present in court.

Separately, the clerical regime has once again arrested political prisoner Hadi (Homayoun) Abed Bakhoda, who is 50 years old. Mr. Bakhoda, who suffers from a fractured spine, was returned to Rasht prison.

He was previously arrested on November 8, 2009, but the henchmen were forced to release him after five months as he was suffering from a variety of illnesses, which seriously deteriorated due to intolerable pressures and prison conditions and could not be treated in the absence of the minimum required medical resources in prison.

Mr. Bakhoda has been a PMOI supporter since the 1980s, and was crippled after being shot by an agent of the Islamic Revolutionary Guard Corps. Even while he was recovering from his wounds, the regime kept him in the prisons of Evin and Qezel Hesar under the most cruel forms of torture and pressures. His brother, Hormoz Abed Bakhoda, was also arrested for supporting the PMOI and executed by a firing squad in 1982 when he was just 20 years old.

Secretariat of the National Council of Resistance of Iran
May 23, 2010