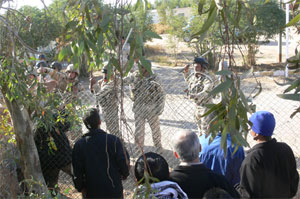 NCRI – On Sunday evening, December 26, and a few hours after their criminal attack on the residents of Ashraf in the hospital, the Iraqi forces, upon the order of Ashraf suppression committee within the Prime Minister’s office, stole a trailer, a crane and other machinery and belongings of the residents which were in the hospital ground. The stolen items worth more than 200,000 dollars. In the course of attack, dozens of Ashraf residents were beaten and wounded.

Concurrent with these inhumane and unlawful measures, the agents of the mullahs’ Ministry of Intelligence, supported by Iraqi suppressive forces and by using 140 loudspeakers, intensified their psychological torture against the residents that has continued for the past 11 months. By making deafening noises, they continuously threatened the residents with murder, massacre, burning, and repatriation.

A number of Ashraf residents have staged a sit-in in protest to these suppressive measures, aggression and stealing their properties. 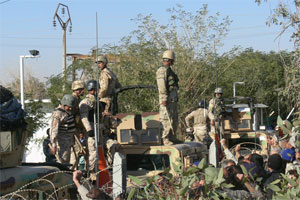 The commanders of Iraqi suppressive forces including Lieutenant Colonel Abdul-Latif Abdul-Amir and the torturer Lieutenant Heidar Azab Mashi explicitly said that the committee for suppression of Ashraf had ordered to steal the properties and to carry out suppressive measures. They said that they were just carrying out the orders received from Prime Minister’s office.

Sadeq Kazem, one of main members of the Iraqi committee, is the agent who ordered firing at the residents during July 2009 attack after receiving orders from the Prime Minister’s office.

Suppressive measures, confiscating and stealing Ashraf residents’ properties, medical restrictions, turning the hospital into a center for suppression and torture, and other practices of Prime Minister’s office, the committee within the PM office, and the Iraqi forces against the residents of Ashraf constitute flagrant violations of many items of International Law, International Humanitarian Law, International Human Rights Law, and many international conventions, which the Government of Iraq is a signatory to. The masterminds and perpetrators of these measures are liable to prosecution and trial as violators of international conventions and for crime against humanity. The Spanish National Court has issued warrants for Iraqi authorities for their crimes on 28-29 July 2009.

Secretariat of the National Council of Resistance of Iran
December 27, 2010