16 prisoners were murdered during the Sepidar prison riot on March 30, 2020; the names of prisoners, and fabricated documents.

At the same time, Mrs. Maryam Rajavi, the President-elect of the National Council of Resistance of Iran (NCRI), warned of crimes against humanity in prisons and demanded immediate action by the UN Secretary-General, the Security Council, the Human Rights Council, the UN High Commissioner for Human Rights, and the European Union to save the lives of prisoners from slaughter and Covid-19.

Now, the NCRI Security and Counterterrorism Committee (SNCRI) discloses documents of killing 16 prisoners in Sepidar Prison in Ahvaz on March 30, 2020. The real number is definitely higher. Also, there is still no evidence about the four victims whose names were announced in the NCRI statement on April 8.

According to documents obtained from Ahvaz prison, acting on the orders of the Iranian regime’s judiciary, the head of Sepidar prison, issued 15 identical reports on April 1 and 2, 2020, specifying the cause of death of 16 prisoners as “taking methadone” after “stealing medicine from infirmary”. Each report is related to one prisoner; however, the names or two victims are mentioned in one of the reports (Sajad Pishdad and Mohammad Reza Mughinami).

All these documents, titled ‘death report’, mention the name, surname, and father’s name of the prisoner, referring to a specific letter with a number:

“Considering the mass riot of the prisoners in this prison on March 30, 2020, the aforementioned was among the prisoners who participated in the riot, and after destroying the prison property and setting it on fire, attacked the infirmary of this prison and stole drugs. He has apparently died due to taking Methadone. A preliminary case has been filed and sent to Ahvaz Prosecutor’s Office, and his body has been delivered to the morgue at the coroner’s office. The issue is brought to your notice for any judicial purpose.”

The names of the 16 demised prisoners are as follows: 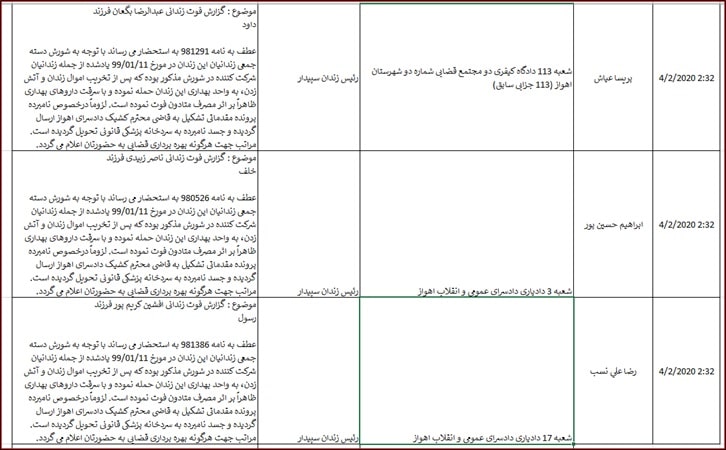 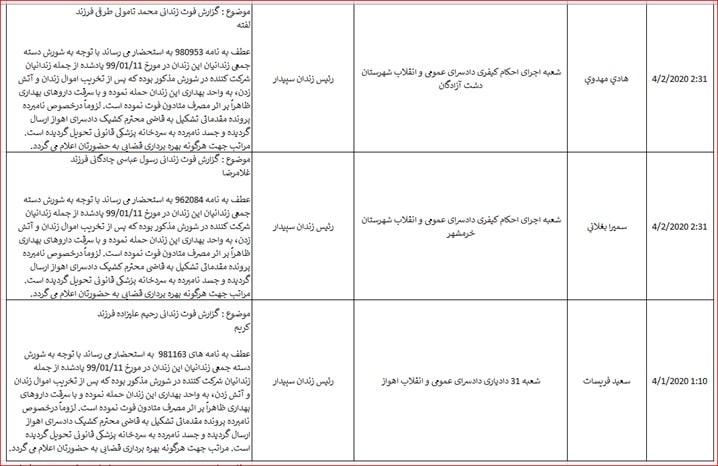 As can be seen in the documents, the letter by the head of Sepidar prison has been sent to various branches of court, prosecution, investigation, and implementation of criminal sentences. All those in these branches who participated in the crime are considered accomplices. The regime’s Supreme Leader Ali Khamenei, his president Ebrahim Raisi, and the Judiciary Chief Gholam Hossein Mohseni Eje’i are the main culprits.