Iran: 580 demonstrations, strikes and protests in May 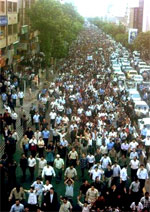 NCRI – More than 580 demonstrations, strikes, protests, and clashes were recorded in May, according to People’s Mojahedin Organization of Iran. People from all walks of life were involved; workers, teachers, students and political prisoners.

At least 120 clashes with suppressive forces were also reported in May.

The three-fold rise in the number of demonstrations and clashes relative to April occurred despite the fact that in order to confront the expanding wave of uprisings and protests, the mullahs’ regime has stepped up executions and arrests under bogus charges.

Secretariat of the National Council of Resistance of Iran
May 28, 2006