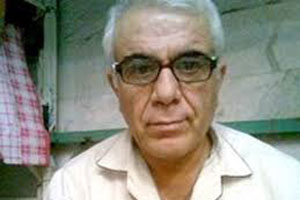 NCRI – In a sham trial, the anti-human clerical regime has condemned to death political prisoner Mr. Arzhang Davoodi who has been in prison for past eleven years.

Mr. Davoodi, 61, from the city of Abadan and an engineer from University of Texas, was arrested in November 2003.

The judiciary of the mullahs condemned him to 11 years in prison, 74 lashes, and five years deprivation of social rights for founding the “Movement for Freedom of Iranians” and “Confederation of Iranian Students”, writing a “manifest against the Islamic Republic system”, and for insulting the clerical regime’s leaders.

The henchmen of the clerical regime who are infuriated about the firm stances of this political prisoner against the mullahs’ regime, tried him for a third time in absentia in the Revolutionary Court of city of Karaj presided over by henchman Asef Hosseini and this time condemned him to death for “membership, support and effective activity in advancing the goals of People’s Mojahedin Organization of Iran *PMOI/MEK) in prison”. This sentence was also conveyed to his lawyer yesterday, July 20.

In the past 11 years, Mr. Arzhang Davoodi has been transferred from one prison to the next and exposed to all kinds of tortures and harassments.

He has numerously gone on hunger strike and has been held incommunicado for a long time. He is currently in a prison in city of Bandar-Abbas.
Condemning a political prisoner for political activities inside the prison is a new level of oppression and tyranny that only the fascists ruling Iran are capable of.

The Iranian Resistance calls on the UN High Commissioner for Human Rights, the Human Rights Council, relevant international bodies, and organizations defending human rights throughout the world to condemn the criminal execution sentence of Mr. Arzhang Davoodi and to work to have this sentence revoked.

Secretariat of the National Council of Resistance of Iran
July 21, 2014

Previous articleIran: Five men lashed in public in four locations in city of Kermanshah
Next articleMother of American held in Iran calls for release of her son