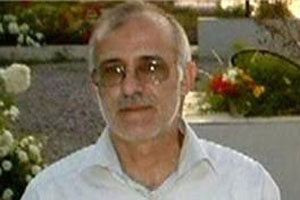 NCRI – The Iranian resistance calls on the United Nations High Commissioner for Human Rights and all human rights defenders to take urgent action to save the life of political prisoner Ali Moezi.

Mr. Moezi was transferred on Saturday January 3, by the clerical regime’s henchmen from Ghezel Hessar Prison to an unknown location.

On October 12, 2014, while he was extremely sick, instead of being taken to hospital, he was transferred to solitary confinement in Tehran’s Evin Prison and was subjected to pressure for two months and only a few weeks ago was returned to ward 209 of the prison.

While Mr. Moezi’s 5-year prison term is about to end, the agents of the Ministry of Intelligence and Security intend to obstruct his release by making new false allegations.

The henchmen have threatened to sentence him to death or add a 5-year prison term on charges of propaganda against the regime.

The authorities have repeatedly threatened Mr. Moezi, the father of two Iranian opposition members in Camp Liberty in Iraq.  “Eventually we will kill you by slow death in prison and you will not leave prison alive.”

Ali Moezi, a political prisoner of the 80s, suffers from various illnesses including acute kidney disease and intestinal obstruction due to years of imprisonment and torture.

In 2009, he was arrested for visiting his two daughters in Camp Ashraf and was sentenced to two years of imprisonment and three years suspended sentence.

In June 2011, he was arrested for the third time for participating in the funeral of Mr. Mohsen Dokmehchi, a member of the People’s Mojahedin Organization of Iran (PMOI/MEK) who was tortured to death by being denied access to medical care.

Mr. Moezi has always been under intense pressure and physical and psychological torture for supporting the PMOI.