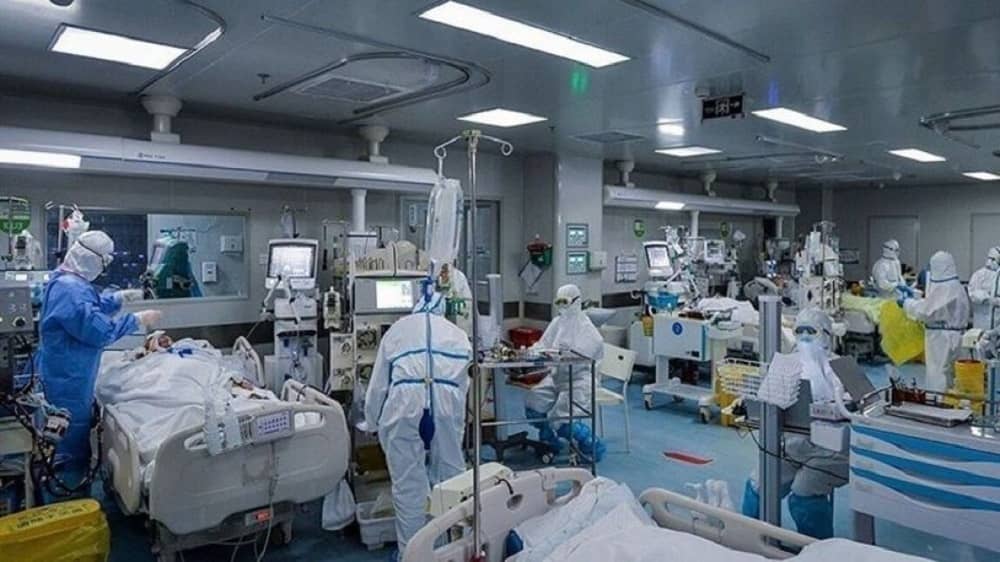 Lying, Covering Up, Preventing Vaccine Import, Refusing To Help Workers, and Sending Them to the Coronavirus Killing Fields

Regime Actions Amount to a Crime Against Humanity. Khamenei and Other Leaders Must Be Held Accountable

While Iran’s population is slightly more than 1% of the world’s population, the COVID-19 death toll in Iran is 9% of the total number of victims worldwide. This is the direct result of the clerical regime’s criminal and plundering policies, particularly the regime’s Supreme Leader Ali Khamenei and the Revolutionary Guards, who tried to stem the tide of large-scale uprisings by pursuing the strategy of mass human casualties.

1. Fearing its impact on the sham parliamentary election and the annual charade on the anniversary of the 1979 revolution, this horrific crime began with the cover-up, lying, deception, and delaying the announcement on the emergence of the Coronavirus in Iran for several weeks. Rouhani claimed on March 31, 2020, “We found out about the spread of Coronavirus in Iran on February 19, 2020, … and it was publicly announced to the people (and) we did not delay even for one day!” Khamenei claimed on March 3, “We, our officials, reported with clarity and honesty from the first day (of the spread of the virus) with transparency.” However, the documents revealed by the Security and Counter-Terrorism Committee of the National Council of Resistance of Iran (NCRI) on April 3, 2020, revealed Coronavirus deaths in December 2019 and January 2020. According to the state-run daily, Jahan-e Sanat, on August 8, 2020, the regime health experts later stated that the first Coronavirus death occurred in the third week of December 2019, but that the regime had kept it secret for political and security reasons. The regime continued Mahan Air (IRGC affiliated Airline) flights to and from China for a long time, despite protests by health experts. By the end of March, Mahan Air had at least 55 flights to various cities in China.

2. In line with this policy, the regime’s leaders tried to undermine the severity of the pandemic as much as they could. To justify his unpatriotic and inhuman policies, Khamenei said on March 3, 2020: “Let’s not exaggerate the issue of (pandemic) too much. It’s an incidence that has happened and will disappear, God willing, not very long. It will (emerge) in the country and spread and then leave.” Worse, he called the deadly virus a “blessing” and an “opportunity.”

On February 25, 2020, in response to health experts’ recommendations that the country should be locked down, Rouhani said. “From Saturday, February 29, 2020, everything will return to normal.” But on May 20, 2020, he brazenly said, “We have made good progress in the fight against this dangerous virus, and we have almost contained it!”

3. By refusing to provide the essential and bare necessities for the workers and laborers, Khamenei forced them out to the Coronavirus killing fields to make ends meet, which triggered the spread of the pandemic. Moreover, he did not provide the slightest aid to the country’s health care systems. On April 6, 2020, Rouhani made a lot of noise, boasting that Khamenei had agreed to allocate $1 billion from the National Sovereign Fund to “the Health Ministry and Medical Education purposes,” and to “the Unemployment Insurance Fund.” But six months later, according to the state-run daily, Salamat news on September 23, 2020, Saeed Namaki, then the regime’s Health Minister, said, “I have not received anything but a small segment of the $1 billion that Khamenei agreed with from the Sovereign Fund. I do not know for what other important issue they have put that fund aside.” Also, his deputy, Iraj Harrirchi told the state-TV, on September 22, 2020, “Only 30% of it (of the 1$ billion allocated budget) has been paid to the Health Ministry… The patience and ability of doctors and nurses are limited.”

4. Massoud Rajavi, the leader of the Iranian Resistance, said on March 7, 2020: The IRGC’s hospitals and Khamenei’s medical centers that hold the best medical equipment and supplies must be opened up to the infected and placed at the people’s disposal. Khamenei must allocate the 100 billion dollars in assets hoarded in the “Headquarters for the Execution of the Khomeini’s Order (EIKO),” and the enormous wealth accumulated in the IRGC, Basij, State Security Force, and the so-called Mostazafan (Abased) Foundation, as well as the money he expends in Iraq, Syria, Yemen, Gaza, and Lebanon to the people’s health and safety… The assets of the Astan Qods Razavi in Khorasan, the huge and wealthy endowment of Imam Reza (shrine) that Khamenei has usurped, can be immediately used to pay the unpaid wages of workers, teachers, employees, and their medical bills on the eve of the (Iranian) New Year. The oppressive and inhuman policy of withholding workers’ wages who are afflicted with COVID-19 and are laid off must cease.

The mullahs’ regime, which has provided the best medical equipment and supplies to its officials and IRGC commanders, has refused to provide the most basic of supplies to the medical personnel and nurses who have put their life on the line to assist our compatriots. It has even refused to pay their wages, to the point where its MP from Gilan Province was quoted by Jahan Sanat, on March 9, 2020, as saying, “Our doctors do not have masks and gloves and are losing their lives due to lack of supplies, as special supplies such as oxygen and medicines are lacking in that Province.

According to Tasnim news agency, on December 9, 2021, Mohammad Mirzabeigi, the head of the regime’s nursing organization, said, “We’ve had more than 145,000 people in the nursing community who are infected with Coronavirus and almost everyone serving as a nurse has acquired this disease at least once.”

According to Salamat news, the director-general of the House of Nursing, said, on December 10, 2021, “The disastrous predicament of nursing in our country has forced many nurses to emigrate in three times more compared to the years before the COVID-19.”

The head of the board of directors of the nursing organization in Khuzestan said, “The last overtime pay that was paid to nurses was in June 2021, and the rest has been delayed for the past six months,” reported ISNA news agency on December 20, 2020.

The flip side of the regime’s policy of mass human casualties has been covering up the actual COVID-19 death toll. For its part, the Iranian Resistance has diligently worked since March 2020 and has issued more than 700 statements to bring to light the true dimensions of the tragedy, particularly the death toll. It has relied on the nationwide network of Mujahedin-e Khalq (MEK/PMOI) supporters in Iran, reliable sources from hospitals and cemeteries, the Resistance Units, and various sources within the regime’s institutions.

5. The number of fatalities was so high that sometimes the regime’s most senior officials had to admit that the official numbers were fabricated and invalid. The regime’s deputy Health Minister, Iraj Haririchi, told Tasnim news agency, on October 14, 2020: “The (officially announced) death toll varies from one and a half times to 2 and 2.2 times the actual figure.”

Hossein Gheshlaghi, a member of the regime’s Supreme Medical Council told Mehr news agency, on October 25, 2020, “The death rate of Coronavirus in the country is about three to four times the official number. The lack of clear and accurate information … is a dangerous and irreparable mistake and is one of the important reasons for the increase in the number of infections and deaths.”

On August 8, 2020, Mohammad-Reza Mahboobfar, a member of the Scientific Committee of the National Coronavirus Combat Taskforce (NCCT) told the Jahan-e Sanat newspaper, “The official COVID-19 figures are one-twentieth of the real figure.”

The regime’s continuing lies and cover-up prompted a regime parliament deputy Amanghelich Shadmehr, to complain to Majlis news agency, on July 22, 2020, “It seems like they (state officials) have taken an oath to kill all the people.” He added that people “are waiting in the death line for an empty ICU bed” and “they cannot even afford to buy masks.”

6. The most criminal aspect of Khamenei’s policy was the ban on the entry of vaccines. At that time, the number of victims had reached 200,000. On January 8, 2021, Khamenei callously declared: ” Importing American and British vaccines into the country is prohibited. I told this to the officials, and I say it publicly now … Of course, I am also not optimistic about the French, with the experience we had with the case of contaminated blood bags.” In the same speech, he promoted the vaccines produced by the EIKO, “The vaccine that was prepared for Coronavirus should not be rejected. This is the source of honor for the country.”

Hassan Ghazizadeh Hashemi, a member of the NCCT, told the state-run daily, Hamdeli, on September 5, 2021: “The drug mafia earns 30,000 billion Rials a month by selling serum and some Coronavirus drugs. The delay in the purchase of the Coronavirus vaccine linked to the activities of the drug mafia; they have infiltrated the decision-making apparatus and delayed the purchase of the vaccine to make more profit.”

Kianoush Jahanpour, a spokesman for the regime’s Food and Drug Organization, said on May 2, 2021: “The $4 vaccine is available at prices up to $50, or the $10 vaccine is available at $25-70 proforma!” He referred to this regime plundering operation as “Vaccine Gate” and added: “Many companies (which import vaccines) do not work in the field of vaccines at all!”

On January 8, 2021, Maryam Rajavi, the President-elect of the NCRI, reiterated that Khamenei’s ban on the purchase of COVID-19 vaccines is a crime against humanity. He is responsible for the deaths of thousands of our oppressed and deprived compatriots due to the Coronavirus. The international community should strongly condemn this crime and must compel the mullahs’ regime to lift the ban on the import of vaccines to the country, she added. Massoud Rajavi, the Leader of the Iranian Resistance underscored that, by banning the vaccine import into the country, it has been clearly proven that the Coronavirus is an ally of the vali-e faqih (Khamenei) and an enemy of the Iranian nation.

The policies of the clerical regime and Khamenei himself are to blame for most of the 500,000 Coronavirus deaths in Iran. From paving the way for the rapid spread of the virus to leaving people and patients at the mercy of the virus and not allocating even a tiny fraction of the $1 trillion under the control of the Supreme Leader and the Revolutionary Guards to fight the virus, to initially keeping the people in the dark on the facts about the spread of the virus and preventing vaccines’ import, etc. This policy and practice are without a doubt a clear case of crime against humanity, and its perpetrators, especially Khamenei, must be brought to justice. 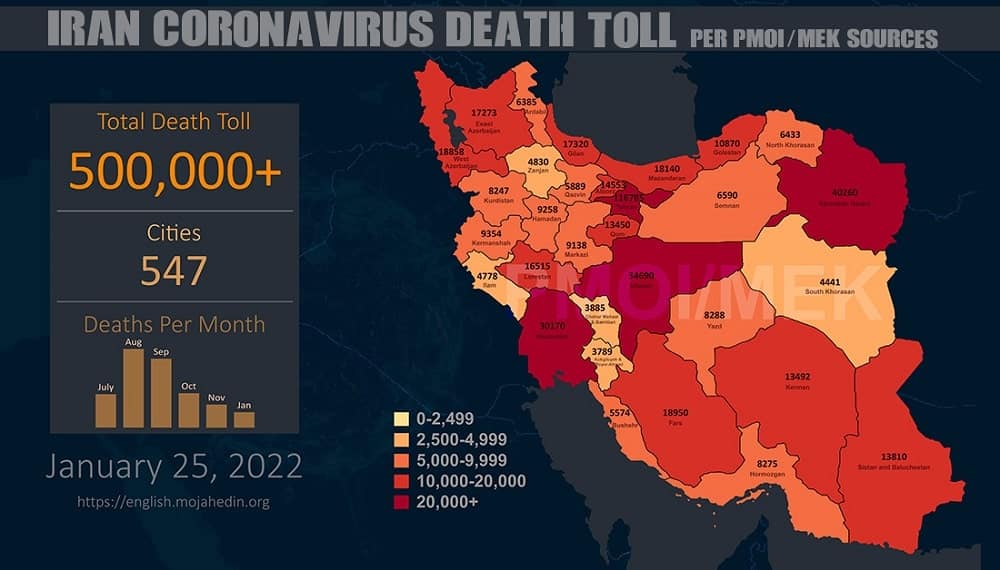 Previous articleIran: Raisi’s Russia Visit Much Ado About Nothing
Next articleIran News in Brief – January 26, 2022