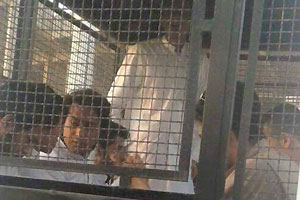 The spectators attending soccer match between Foulad of Khuzestan and Al-Halal of Saudi Arabia expressed their rage and loath against regime’s repressive measures, especially the repression against the people of Khuzestan.

People of Ahwaz were carrying signs in sympathy to a man who immolated himself in protest to the regime’s repressive measures. The signs read: “We are all Younes”.

Younes Asakereh, a 31-year-old street vender and father of two children is in critical condition subsequent to setting himself on fire on March 13 after numerous attacks by repressive state security forces who prevented him from earning a living.

Younes’s self-immolation raised the rage of the people in cities across Iran, particularly in Khuzestan Province.

In the ensuing clashes that lasted for three hours, a large number of people, especially the youth were battered and injured. Some one hundred protesters were arrested and transferred to an undisclosed location.
The Iranian Resistance calls on all international organizations to condemn the savage suppression of people of Ahvaz and to take immediate action to free those arrested.

Secretariat of the National Council of Resistance of Iran
March 17, 2015