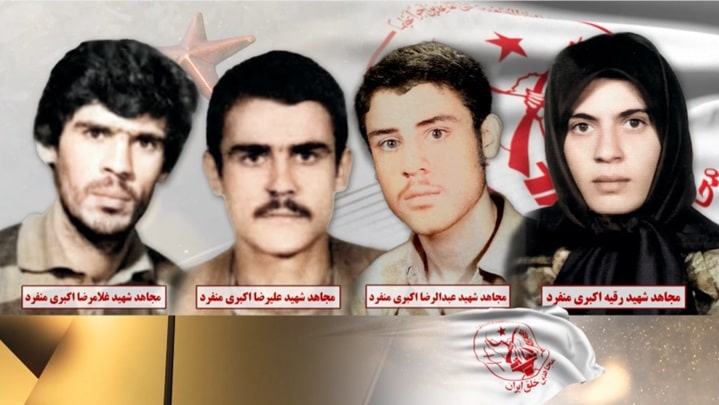 Political prisoner Maryam Akbari Monfared, exiled to Semnan prison, was brutally beaten by the regime’s agents on Wednesday, August 24, while meeting her husband and daughters. She is the sister of four MEK martyrs, Alireza, Gholamreza, as well as Abdolreza, and Ruqiya, who were executed during the 1988 massacre of political prisoners.

Akbari Monfared was arrested during the Ashura uprising in Tehran in 2009 and is currently serving her 13th year in prison. Her additional charge is filing a lawsuit and complaint in 2016 about the execution of her sister and brother hanged during the 1988 massacre of 30,000 political prisoners.

In the past 13 years, Maryam Akbari has not had a single day of furlough to visit her children. At the time of her arrest in the 2009 uprising, her younger daughter was three years old.

On Wednesday, August 24, when Maryam Akbari’s husband and daughter came to visit her, the deputy of Semnan prison named ‘Kordi’ prevented Akbari’s daughter from meeting her mother on the pretext of not wearing a veil. Akbari insisted to meet her child but was returned to her cell by force and beating. However, due to the family’s objection, the prison guards were forced to allow them to meet each other. As a result, a new dossier was opened for Akbari Monfared on charges of rioting and disrupting the prison order.

Earlier and the regime’s intelligence ministry opened a new case against Akbari Monfared, after 13 years of her imprisonment, on the charge of ‘propaganda against the regime, which is scheduled to be heard on September 18 in the so-called Revolutionary Court of Semnan. The main reason for this new case was, of course, her filing a complaint against the execution of her siblings in the 1988 massacre.

The Iranian Resistance calls for the immediate intervention of the UN High Commissioner for Human Rights to save the life and rights and secure the immediate release of Akbari Monfared because she has already served 13 years out of 15 years of unjust imprisonment. According to the regime laws, she should have been released after 10 years.