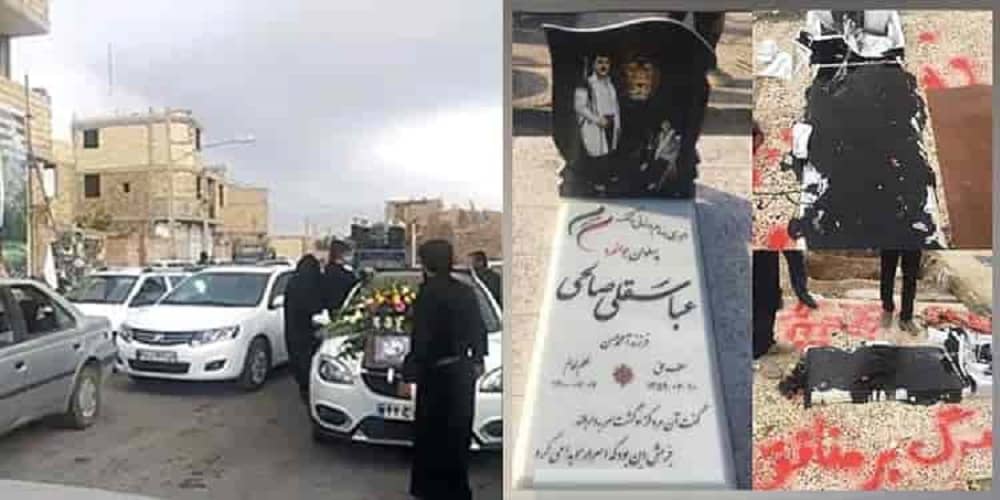 A memorial ceremony was held on Thursday, November 4, 2021, for Abbas-Qoli Salehi on the fortieth day after his brutal execution, in the presence of a large and enthusiastic group of youth and others. The next day, in a cowardly act, the agents and mercenaries of the clerical regime’s Intelligence Ministry desecrated his tombstone and splashed tar on it. They also wrote graffiti around the grave, reading, “Death to the hypocrites, (pejorative name used to describe the main opposition, the Mujahedin-e Khalq (MEK/PMOI).”

In this way, the regime demonstrated its fury and panic in the face of the outraged people of the region, the rebellious youth, and the MEK supporters.

On Wednesday, September 29, Abbas-Qoli Salehi, 42, was hanged in Isfahan Prison after serving 20 years in prison. This criminal execution was met with a wave of protests from the brave people of Yazdanshahr and the Bakhtiari tribes (to which he belonged). His funeral turned into a protest rally against the clerical regime.

Abbas-Qoli Salehi said in the last message he sent from prison with his own voice: “Kahrizak prison (nasty stories of torture and murder of the protesters) and 2009 (uprising), the (violent attack on Tehran’s) university dormitory, and (suppression of the) 2017 and 2019 (uprisings) … What else could the protesters do? For how long should crimes and oppression continue? For regime change, we need to sacrifice. Some must sacrifice their lives, make sacrifices, and many have already done so. I have been in prison for 20 years now. I have seen a lot of things while serving my term here. Many (atrocities), which will outrage anyone that hears these (stories) have been perpetrated … May a sustained effort be made to eradicate the oppression and corruption of these filthy and unpatriotic mullahs.”