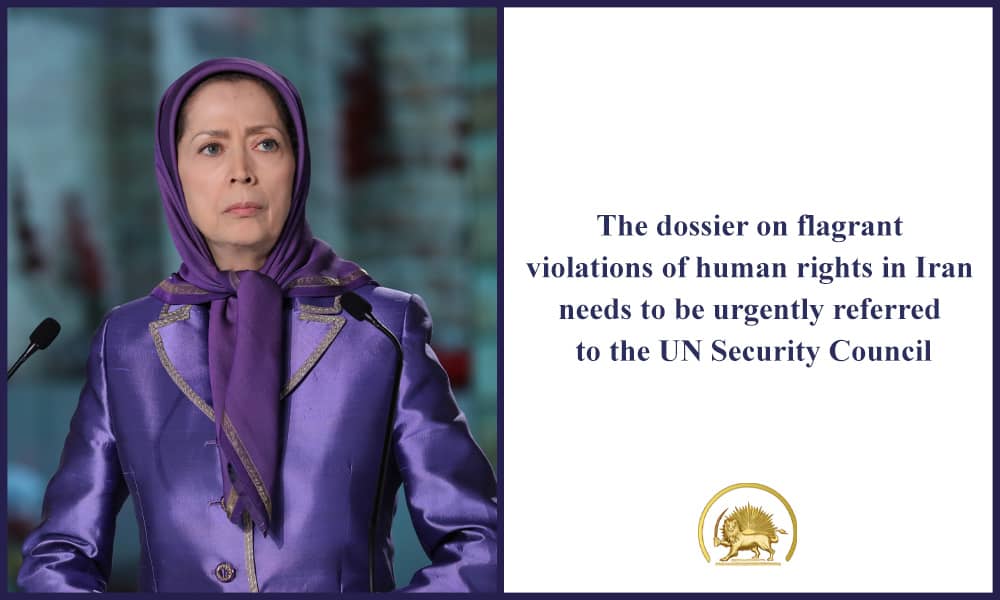 The Iranian people and Resistance demand the referral of the dossier on the Iranian regime’s human rights abuses to the UN Security Council and the prosecution of Ali Khamenei, Ebrahim Raisi, Mohseni Eje’i, other officials responsible for four decades of atrocities, especially the massacre of political prisoners which amounts to a crime against humanity and genocide.

Following the release of the United Nations Secretary-General’s report on the grave human rights violations in Iran to the 76th session of the UN General Assembly, Mrs. Maryam Rajavi, the President-elect of the National Council of Resistance of Iran (NCRI), said: The Iranian people and Resistance demand the referral of the dossier on the Iranian regime’s human rights abuses to the UN Security Council. They call on the UN Security Council to facilitate the prosecution of Ali Khamenei, Ebrahim Raisi, Judiciary Chief Gholam Hossein Mohseni Eje’i, and other officials responsible for four decades of atrocities, especially the massacre of political prisoners which amounts to a crime against humanity and genocide.

Raisi must not be welcome at the upcoming UN General Assembly session, NCRI President-elect emphasized, adding, Mrs. Rajavi added: The Iranian regime is leading violator of human rights, the most active state sponsor of terror, and the foremost threat to peace and security in the world today. It must be subjected to international sanctions under Chapter Seven of the UN Charter.

The UN Secretary-General Report expressed concerns “at prosecutions of protesters following the protests of November 2019, with at least 500 people subjected to criminal investigations, and reports of inhuman treatment and torture to confess to association with opposition groups or foreign Governments. Violations of fair trial rights and standards in prosecutions before revolutionary courts are particularly concerning, given the use of charges involving moharebeh (waging war against God), a capital offense.” It also reiterates, “Protesters, human rights defenders, lawyers, and civil society actors continue to be subjected to intimidation, arbitrary detention, and criminal prosecution, sometimes leading to the death penalty. Women and minorities continue to face entrenched discrimination.”

Referring to the spread of COVID-19 in overcrowded prisons, the Secretary-General reiterates his concerns that some categories of prisoners were disproportionately excluded (from the temporary release schemes), including political prisoners, protesters, lawyers, and human rights defenders.” Also expressing concerns over the impunity about past violations, the Secretary-General referring to the regime’s actions, said, “The order is the latest in a series of reported efforts allegedly aimed at destroying evidence of the execution of political dissidents at that time (1988) and the harassment and criminal prosecution of families of victims calling for truth and accountability.