The West Should Not Tolerate Iran’s Nuclear Extortion 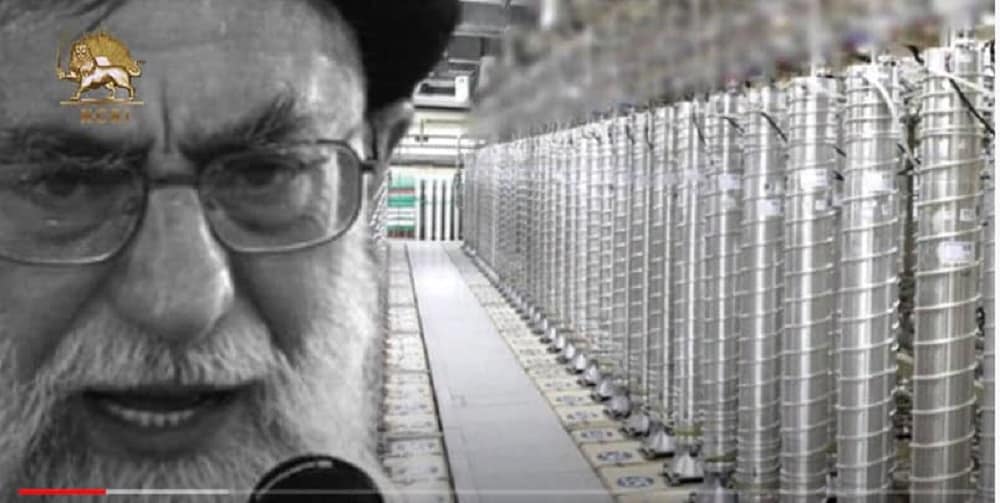 Last week, the Iranian regime’s parliament confirmed Ebrahim Raisi’s cabinet appointments in masse. In subsequent days, that government has continued to take shape, further fueling expectations that Tehran will soon accelerate its malign activities, as well as its crackdown on domestic dissidents.
On Sunday, Mohammad Eslami became one of the latest additions to the new administration, being tapped by Raisi to take over the Atomic Energy Organization of Iran, which has been headed by Ali Akbar Salehi since 2013.
Under Salehi’s stewardship, the AEOI was engaged in a strategy of duplicity, which allowed the regime to advance key aspects of its nuclear program while only seeming to comply with international inspectors over imposed restrictions.
In January 2019, Salehi boasted to state media about having used decoy components and doctored photographs in order to convince the International Atomic Energy Organization that Iran had deactivated the core of the Arak heavy water plant, in accordance with the terms of the Joint Comprehensive Plan of Action. The deception allowed the regime to leave open a plutonium pathway to nuclear weapons capability, which was supposed to be closed. In November of the same year, Salehi similarly boasted that the more familiar uranium pathway had also been kept more wide open than the international community believed.
“They thought that they won the negotiation,” Salehi said of Western participants in the negotiations that concluded in 2015. “But we had a countermeasure, and while we proceeded with the case, they didn’t achieve what they planned for, and we did not become trapped in the enrichment deadlock.”
The potential significance of these “countermeasures” was boldly highlighted more than a year later when, in February 2021, Intelligence Minister Mahmoud Alavi delivered remarks that brought the regime to official acknowledgment of its ambition to develop a nuclear weapon. Alavi began the remarks by reiterating the bogus claim that the regime’s nuclear activities were only ever intended for civilian research and power generation, but he soon cited the ridiculous fatwa of Supreme Leader Ali Khamenei’s on that topic provides no actual guarantee that Iran won’t try to “break out” to nuclear weapons capability.

“The fatwa forbids the production of nuclear weapons, but if they push Iran in those directions, it is not Iran’s fault,” Alavi said. “Those who pushed Iran in that direction will be to blame.” Such statements underscore Tehran’s longstanding nuclear duplicity and also highlight the regime’s strategy of intimidation and blackmail – a strategy that was clearly applied to the talks in Geneva which aimed to restore the JCPOA in recent months.
From the outset of those talks, Tehran has made it clear that it will not back down from its initial position, demanding that the US lift all nuclear sanctions before the regime even considers scaling back its numerous nuclear deal violations. Those violations have brought Iran to higher levels of uranium enrichment than ever before, with some of that enrichment being applied to uranium metal, a substance with no function other than as a key component in the core of a nuclear weapon. During the quickly-stalled negotiations, Iranian officials, including the since-departed President Hassan Rouhani, openly boasted of the regime’s willingness and ability to advance its nuclear program even further and to obtain weapons grade uranium.
Raisi’s administration will continue to pursue the same objectives as its predecessor but will be more open with its belligerence, and will be clearing the way for clandestine advancement of nuclear activities not currently under close scrutiny. Raisi, with his new AEOI head Mohammad Eslami, will be more focused on intimidation and blackmail in an effort to extract concessions and allow themselves to declare victory over Western powers.
This isn’t to say that Raisi and Eslami wouldn’t continue their duplicity. They have both demonstrated their commitment to doing so in various situations. Raisi, for instance, has strongly contributed to the regime’s efforts at downplaying the massacre of political prisoners in which he played a leading role in 1988. Although eyewitnesses to that incident have underlined that at least 30,000 dissidents and activists were killed in the space of about three months, regime authorities have vaguely disputed these accounts on various occasions. At the same time, they have also peddled propaganda that strives to justify the mass executions, with Raisi going so far as to say that he was implementing the will of God.
Eslami’s official lies, meanwhile, have proven to be more sophisticated. In January 2020, while serving as Minister of Roads and Urban Development, he provided a detailed cover story for the Islamic Revolutionary Guard Corps’ missile strike on a commercial airliner, which killed all on board. Eslami even condemned “rumors about a terrorist attack, explosion, or shooting” by the “foreign media.”

Eslami will apply his demonstrated skill with rhetoric to denials and deflection regarding the actions of the AEOI in the near future. At the same time, there can be no doubt in the minds of any informed observer that Eslami will use his leadership of the AEOI to push hard in the direction of nuclear weapons capability. He has been doing so for as long as the Iranian nuclear program has existed.
In 1986 and 1987, Eslami participated in at least two meetings between the Islamic Revolutionary Guard Corps and Abdul Qadir Khan, the “father of the Pakistani nuclear bomb.” The latter meeting resulted in the sale of centrifuge components and designs to the Iranian regime,” effectively starting Iran on the path of a nuclear state.
Eslami has maintained contact with the nuclear black market ever since, and in 2008 the United Nations sanctions him for “being engaged in, directly associated with or providing support for Iran’s proliferation-sensitive nuclear activities or for the development of nuclear weapon delivery systems.”
Eslami’s appointment as AEOI head provides him with an unprecedented opportunity to carry on these activities even while serving on teams tasked with directly negotiating with Western powers that remain hopelessly committed to the JCPOA. To end the regime’s race toward a nuclear bomb, the western powers should instead increase pressure on the regime.