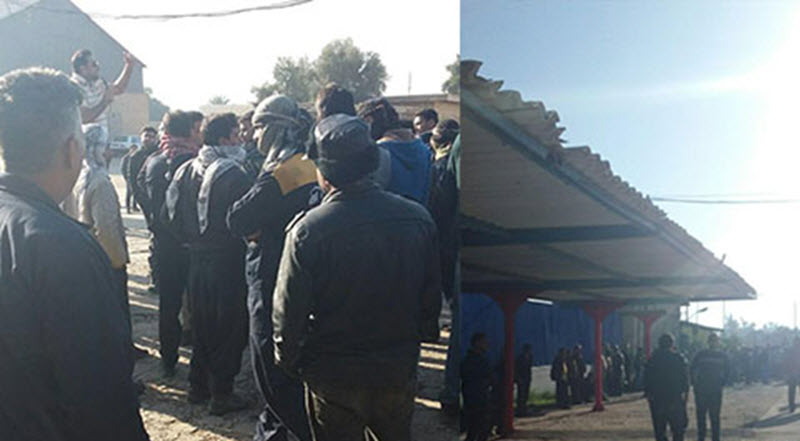 The workers of the Haft Tapeh Sugar Cane Agri-Industrial Company in the city of Shush (Khuzestan Province) once again went on strike in protest against the non-payment of their salaries and demands. The recent strike of the Haft Tapeh workers follows the last month protest that ended conditionally on December 14, 2017, with the payment of one month salary and the promise of regime officials to address other demands of the workers. Workers demanded payment of five months’ wages and insurance premiums, as well as payment of the salaries of contracting workers for 2015 and 2016. Failure to implement the promises of regime officials and the predatory employer has forced the deprived workers of the Haft Tapeh Sugar Cane Company to go on strike again.

The recent strike, which began on January 14 at the Machinery Maintenance Bureau, quickly swept through all parts of the plant. Managing director Kazemi, as always, tried to deceive the workers and break the strike by hollow promises. He distributed among a number of protesters a month’s unpaid salary. But the workers’ representatives defended the workers and exposed the slavish conditions imposed on them and emphasized the need for workers to stand up for their rights. Ismail Bakhshi, a representative of the workers, called the work conditions in the factory as slavery, and in reference to the foolish statements of the Friday Imam of the mullahs in Tehran, who called the rising people in the January uprising as “garbage”, said: If a worker speaks up against all this pressure, an idiot official goes to the podium and says the protesters are garbage. You are the garbage that the Iranian people are disgusted of you. The day our people bring you down, you will know who the garbage is. Workers’ representatives addressed the regime’s managers and agents in the city of Shush, saying: “Do not scare us from dismissal. Life with dignity is better than living with flattery and humiliation.” 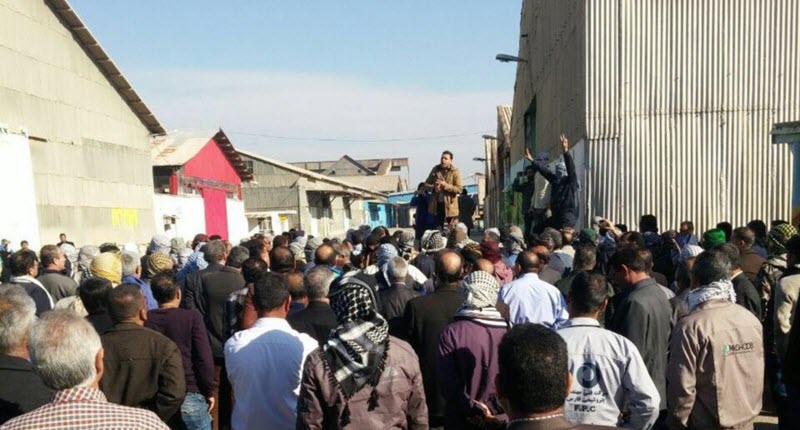 At sunset, the thugs affiliated with the regime agents at the factory, who wore face masks and carried weapons, attacked Ismail Bakhshi, on his way to his house in the city of Dezful. The courageous clash between him and his supporters with masked assassins forced the mercenaries to escape. As a result of the blows, Ismail’s left shoulder suffered a fracture. Three days earlier, he was threatened by mafia bands inside the factory. The members of the Haft Tapeh Sugar Workers Syndicate strongly condemned this brutal act and said that mercenaries should know that the workers would never give up their demands.

Workers of the Haft Tapeh Sugar Cane Factory, with nearly six decades of activity, which over the years has been one of the hubs of employment and industry in Khuzestan, are struggling with a lot of issues caused by the policies of this corrupt and oppressive regime. Continually changing government directors who have no purpose other than plundering national capital has brought this huge labor and capital resource to loss. The hasty and cheap assignment of this factory to the regime-affiliated agents at a price of 10% of its real price, which was done with the collusion of the regime authorities in the name of privatization procedure in 2015, brought the factory to the verge of annihilation and has left workers under much worse conditions than before. The regime’s authorities have refrained from responding to workers’ protests and their questions about the causes of this collusion.

The Iranian resistance hails the brave and deprived workers of the Haft Tapeh, who, with solidarity and unity, have risen up to demand their rights, and calls on the general public, especially other deprived workers and classes, for solidarity with and supporting them and their families. They are afraid of our unity. We must be one.

Secretariat of the National Council of Resistance of Iran
January 16, 2018