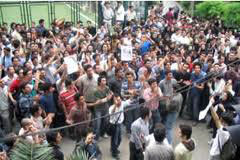 On Sunday, January 21, the protest of deprived people continued in various cities of the country:

1. The villagers of the Ismailieh district of Ahvaz gathered for the second day demanding to work on their farmland, seized by the mullahs’ regime. The police and intelligence agents besieged and attacked the protesters, which led to clashes, and a number of protesters were injured. Farmers have repeatedly called for their land to be returned by presenting their ownership documents, but the regime not only does not return lands, but even refuses to hire them on their own land, and employs non-indigenous workers with very low wages.

2. Workers of the Pars Paper of Haft Tappeh in Shoush continued their strike for the second day in protest of lowering their wages, not implementing the classification scheme, setting up direct contracts and dismissing the manager and administrative director. The workers chanted in their yesterday’s protest rally: “You ISIS, let go of the Pars Paper”.

3. Deprived farmers of Naqadeh gathered outside the Azar Sugar plant to protest for their demands that have not been met yet. The regime’s authorities do not pay the price of their products, as all farmers have to sell their products to the factory.

4. Kian Tire retired workers gathered outside the Ministry of Industry and Mine in Tehran to protest about their poor livelihood conditions. They carried a banner which said: “We have heard lies for six years, but we never saw anything about our rights.” 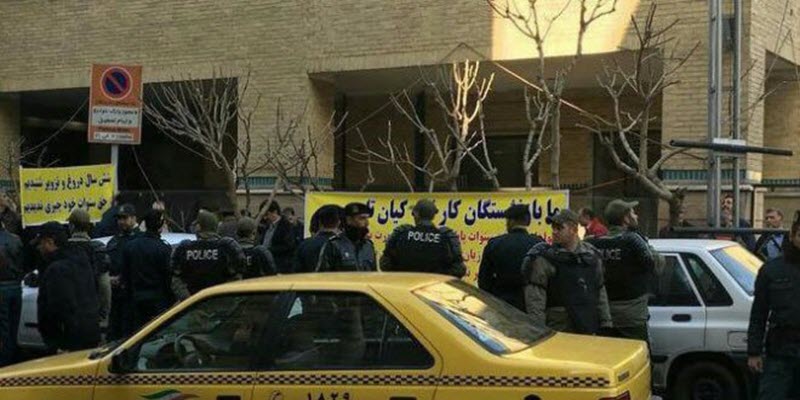 5. Kian Kurd factory workers continued their protests by gathering on Malayer-Arak Road. They requested for the formation of a workers organization at this factory. The protesters carried a banner which said: “Pay attention to the Kian Kurd workers. The salaries of the workers have not been paid For six months.” Other demands of these workers included payment of 2016 and 2017 new year gifts, the retirement pensions of some workers who are on the verge of retirement due to harsh labor laws.

6. In Zanjan, the workers of civil services of district 2 staged a protest gathering in front of the city’s municipality building in protest of the transfer of management of these services to the regime affiliated groups under the guise of privatization.

7. The looted people by the Caspian governmental institute in Mashhad gathered in front of the Khayyam Branch of the institute. They chanted: “Caspian has stolen, and the government has supported it”. They expressed their anger for the authorities disregarding their protests by throwing eggs and tomatoes at the building of the institute. 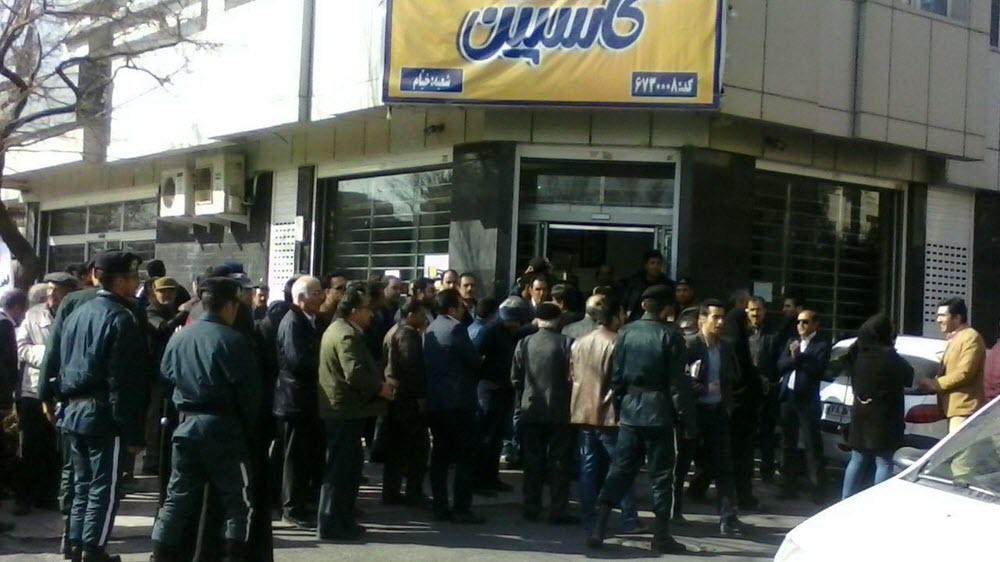 8. In Tehran, a group of people looted by Caspian gathered in front of the Darvazeh Dowlat branch of the institute, and expressed their protest by emptying garbage in front of its building.

9. The staff of the Water Organization in Fatemi Ave. in Tehran gathered to protest against non payment of their salaries for 9 months.

10. In Tehran, a group of PhD. students gathered in front of the regime’s parliament and protested against non payment of their eight-month student demands and unemployment.
11. The Plasco shopping complex shopkeepers protested in front of the ruins of the building. The regime has not made any of its false promises to pay compensation to these shopkeepers. The Plasco building belongs to the Mostazafan Foundation, an institution affiliated to Khamenei. The 17-story building, one of the most important clothing and apparel centers, with 560 commercial units, collapsed on January 20 last year in a terrible fire. The mullahs’ regime did not take any steps to extinguish the fire and save a large number of shopkeepers and firefighters who were caught in the fire.

12. Writing anti-government slogans, such as Death of Khamenei, continues in different cities. Students in Urmia wrote on the wall: Death to Khamenei, father has no bread. In Yasuj, in response to the regime’s mercenaries who clean the slogans from the walls, the people wrote: “Death to Khamenei! Let’s assume you cleaned up and the walls are clear and white, what are you going to do with the black face of Leader (Khamenei)?

Previous article
U.S. Support for Iran Protesters Must Not Waver
Next article
Wave of Arbitrary Arrests Throughout Iran and Call for Immediate Release of Arrestees