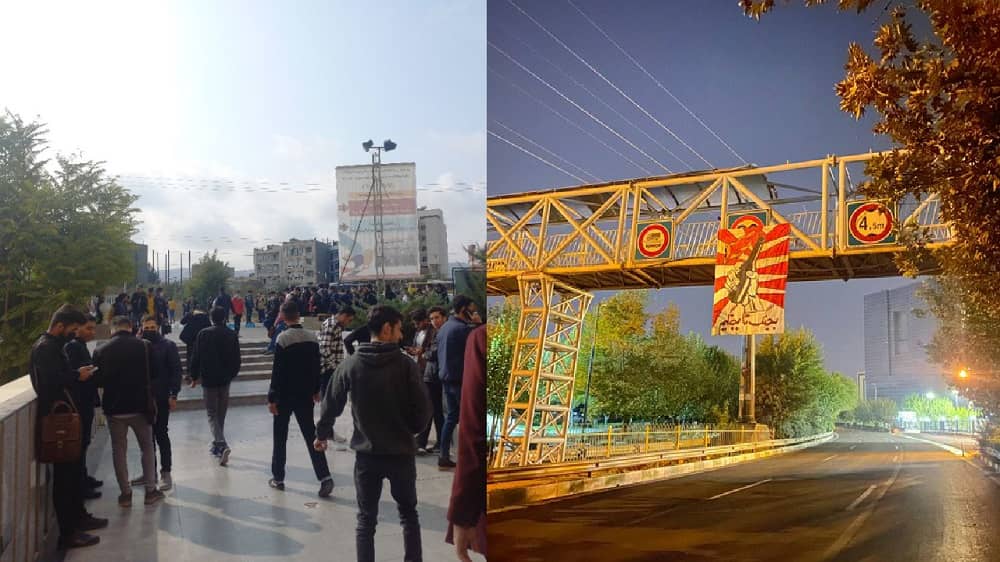 The mullahs’ regime started a new wave of crackdown against students who resumed protests across the country on Saturday, October 29, the 44th day of the nationwide uprising. IRGC and MOIS agents attacked some universities in Tehran and other cities and arrested a large number of students.

In Tehran, suppressive forces surrounded the Technical Faculty – Fardis 2 and severely beat the students. They blocked Amirabad Street towards the university and controlled all university entrances by stationing a large number of State Security Forces (SSF), trying to find active students inside the campus. In the university dormitory, the security forces opened fire at the students protesting in support of students inside the campus with shotguns and paintballs.

In Fereydoun Shahr, people gathered outside the justice department to protest the arrest of their children. In Saveh, Markazi Province, youths set fire to a gas station. In Jonaqan, people protested at night and blocked the roads. In Borujerd, western Iran, suppressive forces opened fire on the people and started a fight between them and the youth in Jafari Square. The people of Lashte Nesha in Rasht, northern Iran, staged a street protest chanting, “Death to Khamenei.” One of the protestors was shot.

In Isfahan, night protests were held in Sepah, Ahmadabad, Zainabieh, and Charbagh streets. People blocked the road by burning tires and made the regime’s agents run away using Molotov cocktails. In Borujerd, youths set fire to two motorbikes of police forces. In Piranshahr, locals staged their protest, and youths attacked the home of one of the regime’s mercenaries. In Bukan, night protest was accompanied by setting a fire, blocking the road, and fighting with suppressive forces. In Arak, people attacked suppressive forces and made them flee. The people of Marivan staged a night protest and clashed with suppressive forces. Protesters destroyed the statue of Qasem Soleimani in Marivan. In Lahijan, northern Iran, security forces opened fire at people who had staged a night protest. In Neyshabur, northeast Iran, youths torched a regime’s seminary.