Written by The Editorial Board
30th October 2022 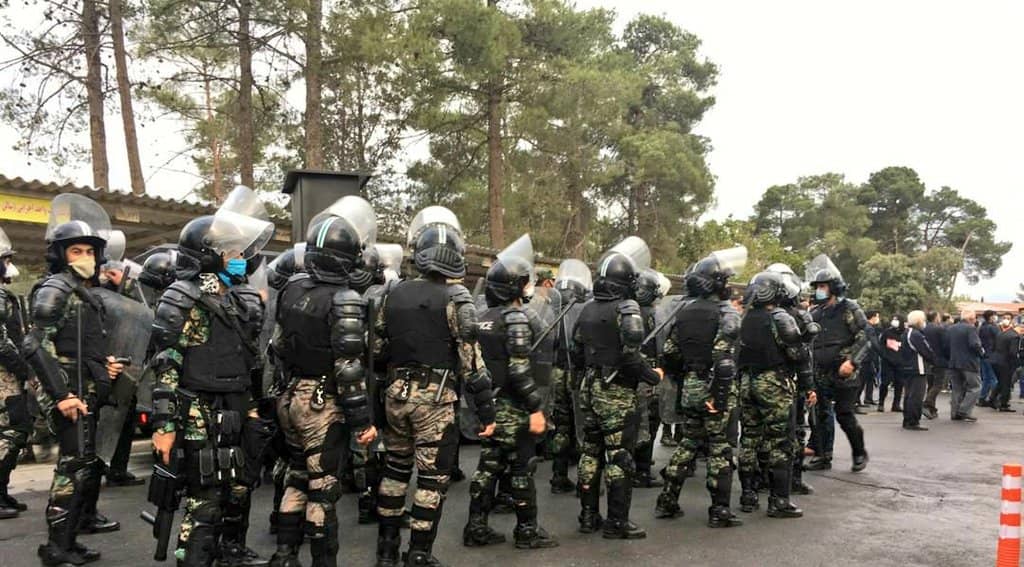 Far from being an expression of power, the bellowing rant by IRGC’s Commander-in-Chief Hossein Salami in Shiraz yesterday pointed to the Force’s utter weakness and failure to thwart the nationwide uprising that entered its 45th day on October 30.

This fact was borne out in a series of highly confidential reports that the NCRI has made public recently exposing the modus operandi of the Islamic Revolutionary Guard Corps (IRGC) and the regime’s policy to counter the nationwide uprisings. The upshot is that the IRGC has already been playing a leading role strategic and operational direction of the regime’s suppressive campaign against the uprising.

The directives point out the fact that threat levels the regime has assigned to the persistent protests and the role of the organized resistance are higher than what it publicly acknowledges and significant defection and disobedience brewing within the IRGC’s ranks, getting the attention of top brass.

Some of the information bears the signatures and seals of IRGC commanders, including its Commander-in-Chief. Maj. Gen. Hossein Salami, indicating the latter’s personal involvement.

Two days after the dismissal of the head of the IRGC's Intelligence Unit, the commander of the #IRGC's 'Vali Amr' Unit, which is in charge of protecting Ali #Khamenei was fired today by the IRGC commander-in-chief Hossein Salami.https://t.co/qc3KsFFqty pic.twitter.com/R9d3lfaSS4

In an order classified as “Urgent – very confidential” on October 20, the deputy commander of Sarallah HQ in Tehran (in charge of security in Tehran), IRGC Brigadier Hossein Nejat, says: “Considering the increasing trend of divisionary activities by elements of the Resistance Units affiliated to the Hypocrites (pejorative term for MEK) terrorist group against classified locations, especially IRGC bases, and mindful of the directive by the Honorable Commander-in-Chief of the Islamic Revolutionary Guard Corps, … it is necessary to identify all classified locations including military, government, and judicial locations, which are prone to divisionary actions.”

According to a document classified as “highly confidential,” prepared for Ali Khamenei, the regime’s supreme leader, Salami says that in the first two weeks of the uprising, the IRGC, the State Security Forces, and the Ministry of Intelligence had detained 9,654, 9545, and 1,246 protesters, respectively. The document adds that 42 percent of those arrested are under the age of 20. Moreover, Salami asserted that some of the detainees were “organized” members of the MEK.

The regime is also fearful of the demoralization of its suppressive forces. On October 11, 2022, a document classified as “highly confidential” and signed by Salami outlines major security protocols. While pointing to damages to the IRGC’s assets, premises, and casualties, and specifically acknowledging the existence of “demoralized … personnel,” Salami orders his security forces to “refrain from deploying demoralized, disaffected and disgruntled personnel in riot control operations.”

It also seems the backlash over the brutal killings of at least 1,500 protesters in the November 2019 uprisings prompted the regime to formulate a new approach to subsequent uprisings. According to the directives, on Supreme Leader Ali Khamenei’s orders, suppressive forces conducted mass detentions during this year’s protests, especially in Tehran and Karaj”.  Accordingly, a substantial number of over 450 who have been killed since the protests started, happened in custody or away from the public scene to reduce the backlash.

The documents were made public by the Security and Counterterrorism Committee of the NCRI and were obtained by the MEK inside the country.

The intelligence sheds light on important facts: 1) The regime’s IRGC is heavily invested in the suppression of the uprising already; 2) Despite this suppression, the protests are continuing with even more ferocity, revealing the regime’s fundamental vulnerabilities; 3) The protests are organized and influenced by the Resistance Units across the country.

By all indications, the Iranian people, who overthrew the monarchical dictatorship in 1979 and are today rising up against the ruling religious dictatorship, are paving the way for a new democratic revolution. The aim is the establishment of a secular democratic and non-nuclear republic that respects human rights. And that aim has never seemed more accessible.

#Iran regime’s IRGC kills 2 brave protesters calling for regime change in Dorud today. UN Security Council, EU, US and all #humanrights orgs should condemn this crime and take efficient international measures to confront the suppression of #IranProtests by the regime. #FreeIran