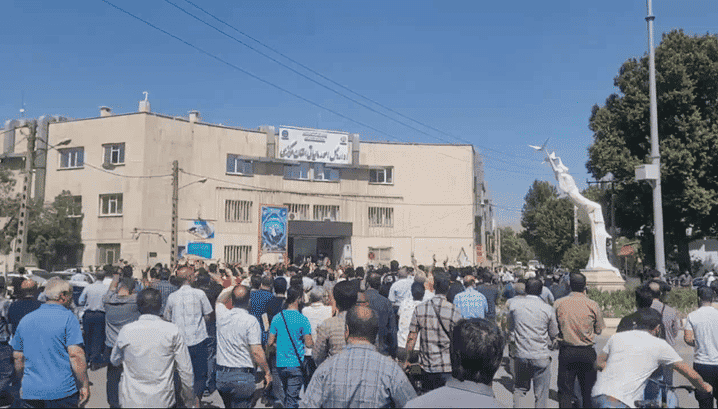 Bazaar merchants in Arak continued their strike today, Tuesday, June 14, in protest of high prices, economic recession, and heavy taxes. At the same time, food vendors and wholesalers in Arak gathered in front of the provincial tax administration to protest the plundering taxes.

Kazerun Bazaar closed completely in a strike for the second day in a row. In Isfahan, home appliance sellers closed shop. Traders and bazaar merchants in Minab staged a protest gathering outside the city’s tax office to protest the government’s heavy taxes. In Shiraz, merchants in Vakil Bazaar closed their shops and staged a protest march. In Boroujerd, traders and bazaar merchants went on strike. In Najafabad, all shopkeepers in the mobile phone market closed their shops.

In their new round of protests that began on May 6, pensioners held demonstrations today in various cities, including Ahvaz, Shush, Doroud, Zanjan and Kermanshah. Retirees chanted: “High prices and Inflation is a disaster for the people”, “Our radio and television is a disgrace”, “Our tables are empty, enough of empty promises.” In Mashhad, the repressive State Security Force prevented retirees from gathering in the streets where they intended to gather.

Secretariat of the National Council of Resistance of Iran
June 14, 2022

Previous articleIran News in Brief – June 15, 2022
Next articleTraders and Bazaar Merchants in 4 Cities Go On Strike