Protesters chant: “Even if we have to sacrifice our lives, we will pursue our rights”
Strikes and protests by workers, laborers, and defrauded investors against the mullahs’ plundering policies

On Sunday morning, August 1, 2021, physicians gathered in Tehran, Shiraz, Hamedan, Kerman, Yasuj, Kermanshah, Khorramabad, and Mashhad to protest the harsh working conditions and lack of job security. The rally was held in Tehran in front of the regime parliament and in other cities in front of the province’s University of Medical Sciences and Health Services branches. The protesting doctors carried placards, protesting against the inhuman treatment of doctors in the clerical regime and “the dominance of the medical mafia” in the healthcare system. They chanted slogans including, “Even if we have to sacrifice our lives, we will pursue our rights,” “Internship is slavery law,” “Doctors without rest and food, must go on strike,” and “The culprit for the current plight of the doctors are the negligent officials.”

Also, on Sunday, on their 20th day of protest, the fired workers of Haft Tappeh sugarcane factories marched in the streets of Shush after gathering to protest in front of the Shush Governor’s Office. They demanded to return to work.

On the same day, Sepahan Cement Company personnel and workers in Isfahan went on strike following the regime’s failure to deliver on their promises to pay workers legal benefits.

At the same time, Isfahan Steel Industry retirees and pensioners and social security retirees in Ahvaz also gathered outside the Social Security offices in Isfahan and Ahvaz to protest against their living conditions and failure to meet their legitimate demands.

On Sunday, defrauded investors of the Caspian Institute, whose shares are held by the Revolutionary Guards gathered in front of the “Fereshtegan Liquidation Board” building in Saadat Abad, Tehran, to protest the looting of their property and assets. Also, today, in continuation of their previous protests, the defrauded investors of the “Cryptoland exchange” gathered outside the Economic Crimes Tribunal.

Secretariat of the National Council of Resistance of Iran (NCRI)
August 1, 2021 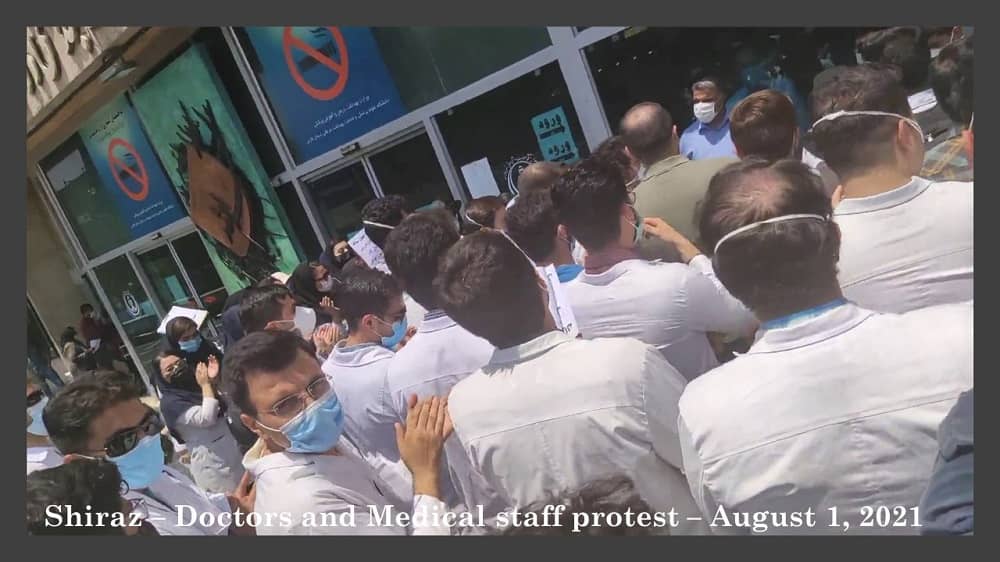