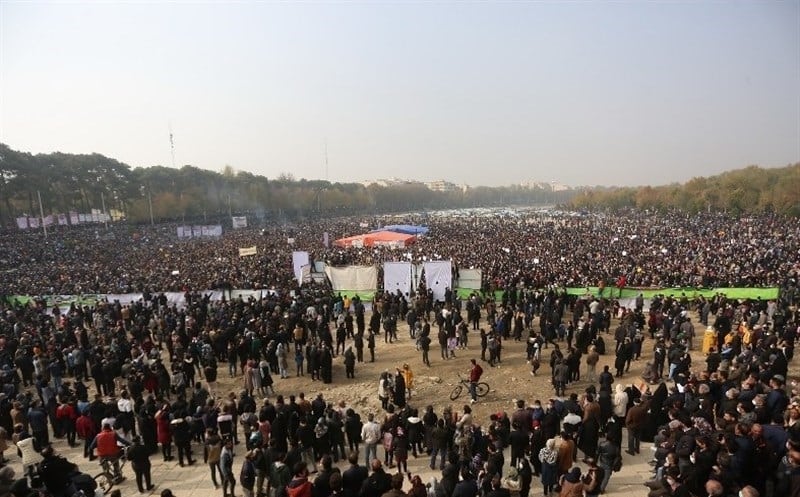 Iran Protests in Shahrekord and Isfahan – No. 5

Farmer’s Warning: We Are Either Killed in this River or You Open the Water

Bakhtiari youth and people demonstrated on Tuesday, the third day of protests against water shortage in Shahrekord, the provincial capital. The demonstrators chanted, “We are fighting women and men. Fight and we will fight back,” and “We will turn water to blood”. They also vowed to continue the protests until their demands are met.

Meanwhile, the sit-in by farmers of Isfahan, continuing round-the-clock in Zayandeh Rud river, entered its 14th day. In a video clip posted on the Internet, a farmer, addressing the sit-in, warns the clerical regime that if the water is not returned to the river, the diversions to the Yazd and Isfahan steel refineries will be shut. “We are either killed in this river or you open the water,” he stressed.

The state-run daily Mostaghel wrote on November 22: The wrongheaded policy of setting up Mobarakeh Steel in 1991 (located in Isfahan) and Aliaji Steel in 1999 (located in Yazd) have led to the elimination of the water supply. In Iran, the most important steel industries are located in the central desert regions! This is because most of Iran’s economic managers, especially in petrochemicals and steel, have been from desert provinces such as Isfahan and Yazd.

Another state-run media Setareh Sobh, wrote on November 22: “Each kilogram of steel production consumes about 30,000 liters of water. It is certain that these industries are consuming water from the Zayandeh Rud river. As a result, in addition to the drying up of the Zayandeh Rud river, the underground water beds are also at high risk of drying out. And the plains of Isfahan and Khorasan sink 12 cm annually.

In a message Mrs. Maryam Rajavi, the President-elect of the National Council of Resistance of Iran (NCRI), hailed the people of Isfahan and Chaharmahal and Bakhtiari provinces. She said Khamenei and the IRGC are primarily responsible for the destruction of water, soil, and environment, as well as for poverty, unemployment, and the killing of 500,000 Iranians during the Coronavirus pandemic. Iran must be taken back from its criminal rulers.

Previous articleIran: “Bitter Nightmare” of November 2019 Protest Will Happen Again, Expert Warns
Next articleU.N. Nuclear Watchdog Trip to Iran Ends Without Results, What to Do Now?