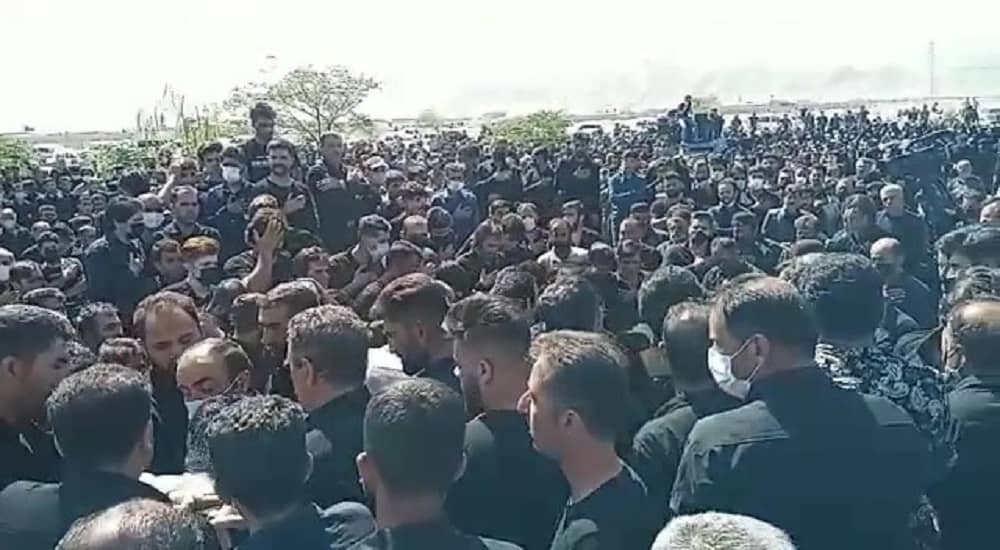 The clerical regime hanged 42-year-old Abbas-Qoli Salehi in Isfahan prison on Wednesday, September 29, 2021, after enduring 20 years in prison. On Tuesday night, Abbas-Qoli’s mother, along with a large number of people and youth in Isfahan who had been informed of his possible execution, gathered in front of the prison in protest and stood there until morning.

The suppressive forces and the intelligence and security agents of the clerical regime warned Abbas-Qoli’s family against protesting. For this reason, his body was not handed over to his family on Wednesday. Despite repressive measures, a funeral was held on Thursday in the presence of many angry residents of Yazdanshahr.

Mrs. Maryam Rajavi, the President-elect of the National Council of Resistance of Iran (NCRI), said: Throngs of courageous Bakhtiaries and the brave residents of Yazdanshahr voiced their anger and resentment towards the mullahs’ regime by attending the funeral procession of Abbas-Qoli Salehi. He was an innocent prisoner executed after 20 years of imprisonment which shows the cruelty of the clerical regime that cannot continue its rule for even one day without torture and executions. Fearing the Iranian people’s wrath and opposition to the mullahs’ religious fascism, Khamenei selected Ebrahim Raisi, a mass murderer, as president. He thus tries in vain to prevent the escalation of people’s protests by stepping up torture and executions. The international community should refer the dossier of the clerical regime’s crimes in Iran to the UN Security Council and prosecute its leaders for four decades of crimes against humanity and genocide.

Nationwide Uprising Continues for the 13th Day, Spreads to 163 Cities.