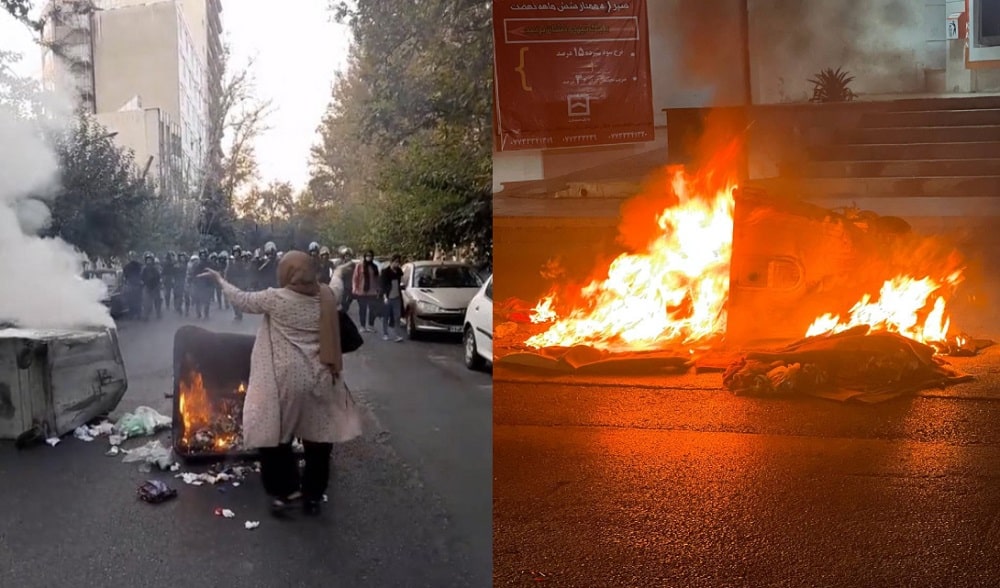 People Chant, “Death to Khamenei,” “From Zahedan to Tehran, I Sacrifice My Life for Iran,” and “Death to the Oppressor, Be It the Shah or the Leader (Khamenei).”

Since this morning, October 1, 2022, simultaneous with the nationwide strike and demonstration of students, dozens of districts in Tehran, especially in central areas, were the scenes of demonstrations by different groups of people. Despite the brutal repression of the past two weeks, these demonstrations, and strikes, which took place throughout the day, showed that the uprising will continue and escalate until the overthrow of the clerical regime. The protesters were chanting, “Death to Khamenei” and “Death to the oppressor, be it the Shah or the Leader (Khamenei).”

Around noon, fearing the spread of the demonstrations, the clerical regime deployed a helicopter air patrol. The youth blocked Jomhouri Street and protested, chanting, “Mojtaba (son of Ali Khamenei) will go to the grave before becoming the leader.” Demonstrators on Kargar Street chanted, “All these years of crime, death to this velayat (Khamenei).” In Enqelab square, a large crowd chanted, “Death to the dictator.” In Saadat Abad, the people and the youth chanted, “From Zahedan to Tehran, I sacrifice my life for Iran.” Many people and youth gathered in Taleghani junction. In Naderi Street, rebellious youths clashed with the suppressive forces. In Bozorgmehr and Naderi, youths used rocks to confront the attacking agents. In Jamalzadeh, a large crowd chanted, “Death to the oppressor, we do not want neither a Shah nor a leader (Khamenei).” In Lalezar, demonstrators chanted, “This year is a year of sacrifice. Seyyed Ali (Khamenei) will be overthrown”. In Shahr Qods, people demonstrated and chanted anti-government slogans. In Aladdin, Tehran, the suppressive forces tried to stop the demonstration with tear gas. On Keshavarz Blvd., the crowd chanted, “Nobel Iranian, support, support” and “Death to the dictator.” A large crowd also gathered in front of Tehran University chanting, “The mullahs must get lost” and “Death to the oppressor, be it the Shah or the Leader (Khamenei).”

Early evening, in Sadeghieh, a large crowd of young people took to the street. In Hafez Street, rebellious youth confronted the suppressive forces, and the sound of gunfire could be heard. In the Qeytarieh subway, protesters chanted, “Death to the dictator.” Fire and smoke could be seen everywhere on Enqelab street, which was like a war zone. In Qolhak, the youths chanted, “This year is a year of sacrifice. Seyyed Ali (Khamenei) will be overthrown”. On Valiasr Street, a large crowd took to the street chanting, “Death to Khamenei.”

Previous article
Iran News in Brief – October 2, 2022
Next article
Iran: On the 16th Day of the Nationwide Uprising, Protests in Dozens of Cities, in Over 45 Universities