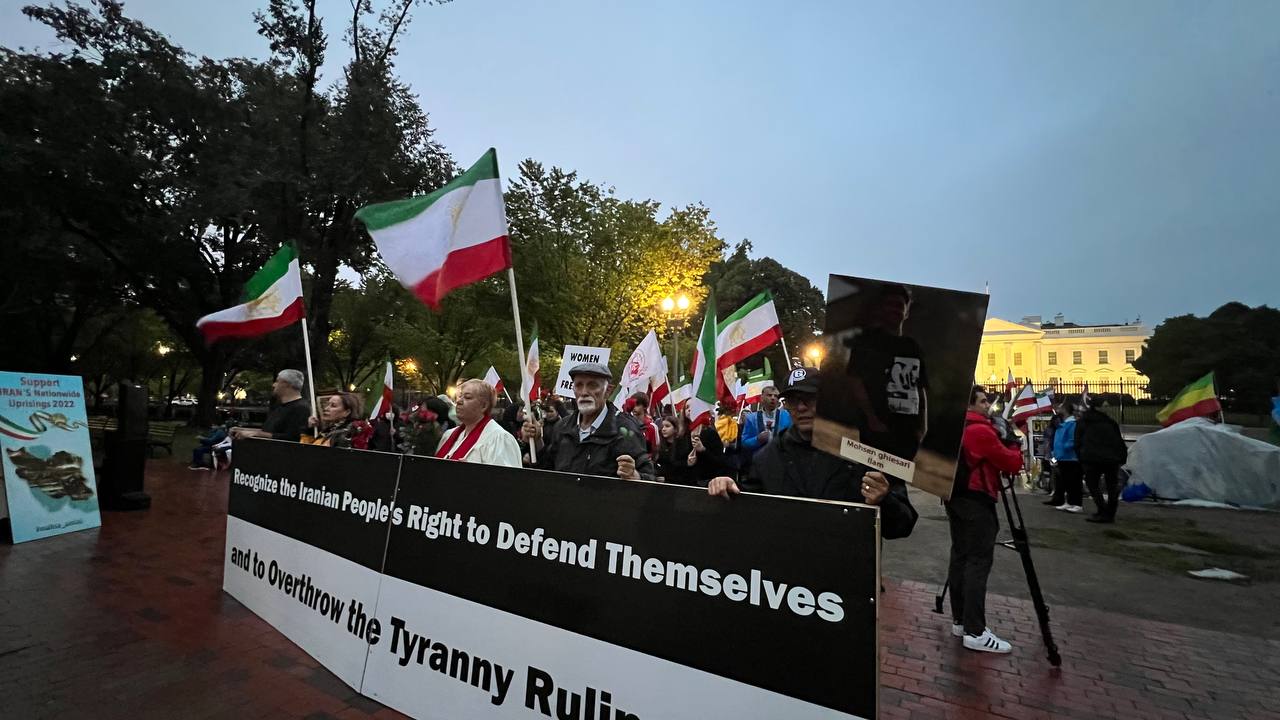 Today, October 2, dozens of universities in Iran started the protest in the morning and called for regime change. One of the major hot spots was the Sharif University of Technology in Tehran.

October 2 – Tehran, #Iran
More footage of authorities dispatching a large number of security units to #SharifUniversity of Technology where they have trapped students inside the campus.#IranProtests2022 #دانشگاه_صنعتی_شریف #مهسا_امینی pic.twitter.com/aAZ2OWtPwY

October 2 – Tehran, #Iran
Footage of people rallying outside #SharifUniversity of Technology, pressuring the authorities to open the gates to allow the students trapped inside leave the campus.#IranProtests2022 #دانشگاه_صنعتی_شریف #مهسا_امینی pic.twitter.com/8ZCrLkdi0e 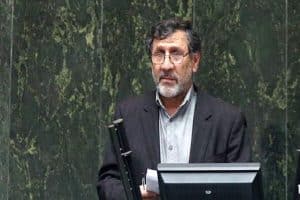 At the public session of the Iranian regime’s parliament today, MP Gholamhossein Rezvani said: “After nearly five decades, again, we have some people in this country who are trying to polarize the society. The group of ‘hypocrites’ (the regime’s term to slander the MEK) from Masoud Rajavi sowed the seeds of sedition in 1979 and 1980 and they reaped it in 1981. This gang is delegitimizing the state. All of you know who they are. These people are the followers of the MEK and Masoud Rajavi.”

During an interview on state TV, Nezamoddin Mousavi, spokesman of the parliament’s leadership said: “Field reports are based on the fact that there has been an initial intelligence planning. There have been some organized and trained groups, that actually entered the streets under this pretext (of Mahsa Amini’s death) who came and created chaos. For a long time, counter-revolutionary elements of these groups abroad were actually looking for an excuse and had prepared their weapons, which they sometimes brought into the country. Anyway, a coherent movement has been made on this issue both inside and outside the country.”

At his Friday prayer sermon, Mohammad Barani, the Supreme Leader’s representative in Zahedan said: “The issue of women in the Islamic Republic of Iran and the zeal of the people of the Islamic Iran was an opportunity for the enemy to exploit.”

“For a long while, the MEK had done their educational work in some countries and sometimes deceived young people with big money and committed violent actions. Otherwise, an ordinary protester does not harm people’s property. These are the same grouplets that are thriving in European countries or in the Kurdish region of northern Iraq.” 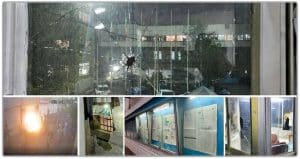 During the protests of October 1, protesters  in Tehran gave their first appropriate response to Khamenei’s mouthpiece, the Kayhan newspaper, who had slandered protesters with titles such as “terrorists”, “thugs” and “hooligans”. According to state media reports, protesters threw stones at the Kayhan building and broke down windows.

Reporting on the attack, Kayhan wrote: “Hired mobs who were organized, trained and prepared during the past days to cause disruptions and attempted to destroy and set fire to public property, e.g. bank branches, office buildings, police cars, ambulances and personal vehicles, started a gathering in front of the Keyhan’s office. First, they threw Molotov cocktails and using concrete barriers, they tried to block the street. Then, they went on chanting offensive slogans against Keyhan and Hossein Shariatmadari, its editor-in-chief. They intended to enter the building of the newspaper, but were prevented by the institution’s security forces as well as the timely action of the intelligence deputy of the Islamic Revolutionary Guard Corps who dispatched the IRGC and Basij forces. The mob only damaged parts of the institution’s building and escaped.” 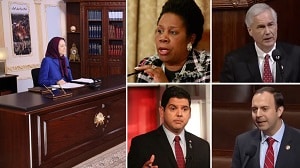 In her meeting with Rep. Tom McClintock, a senior member of the House Judiciary Committee, Maryam Rajavi gave an overview of the latest developments related to the nationwide uprising in Iran. Referring to the ongoing brutal crackdown, especially on women, she said: In these circumstances, the international community must stand up to the clerical regime and stand with the Iranian people. The time has come for the international community to recognize the right of Iranians to defend themselves and to fight to overthrow the mullahs’ regime. The Iranian people have risen up against fundamentalism and religious tyranny, which is in the Middle East’s and the world’s interests.

Hail to the Blood-drenched Zahedan 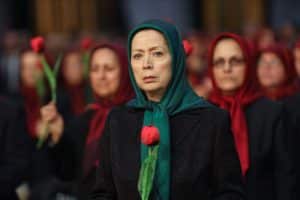 As Massoud [Rajavi, leader of the Iranian Resistance] said, the blood-drenched uprising in Zahedan “will continue until victory and the uprooting of Khamenei and his bloodthirsty regime. The regime should be learning new lessons in Zahedan and Ahvaz.”

From our Sunni compatriots in Sistan and Baluchestan, to the arisen people of Talesh in the north, to the protesters in Kurdistan and Azerbaijan in the west, to the arisen people of Tehran, Khorasan, and Khuzestan, their sacrifice, sufferings, and desires have intermingled, creating solidarity and unity on the battlefield. The uprising is forging ahead towards the regime’s overthrow and establishing freedom and democracy. 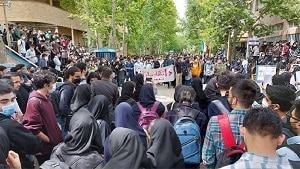 Protesters in at least 164 cities throughout Iran’s 31 provinces have taken to the streets seeking to overthrow the mullahs’ regime. Over 300 have been killed by regime security forces and at least 15,000 arrested.

Iran’s nationwide protests entered their 16th consecutive day on Saturday with reports of college students taking to the streets in anti-regime rallies and storeowners continuing a general strike, especially in the cities of Kurdistan and West Azerbaijan provinces. Authorities are escalating their systematic and deadly crackdown parallel to disrupting internet connections.

Women the Force for Change, and Vanguards of Uprisings Our gathering today is to pay tribute to the bravery of Iranian protesters, women, and youths, and pay homage to the martyrs of the Iranian people’s nationwide uprising.

In the beginning, we honor the memory of the heroic martyrs of the September 27, 1981, uprising, whose memories we will remember forever. We hail the rebellious cities in the Iranian people’s nationwide uprising, from north to south, and from east to west. From Azerbaijan and Kurdistan to Qeshm Island, Behbahan, Zahedan, Mashhad, Bojnourd, Ardabil, Tabriz, Chabahar, and to the Greater Tehran. Iran’s highest military body instructed the commanders of armed forces in all provinces to “severely confront” protesters who took to the streets following the death in custody of Mahsa Amini at the hands of Iran’s morality police, Amnesty International said today after obtaining leaked official documents which revealed the authorities’ plan to systematically crush the protests at any cost. The crackdown has left at least 52 identified victims dead and hundreds injured to date. 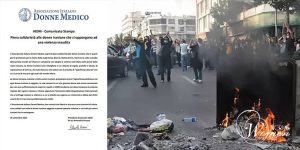 The Italian Association of Women Doctors announced its full support and solidarity with Iranian women in a statement. The text of the statement is as follows: 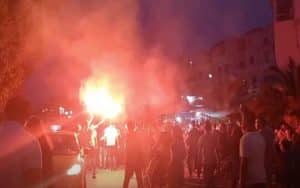 Iran is on the path to a fundamental change. The third week of the nationwide protests has begun. It all began with the death of Mahsa Amini arrested by the regime’s so-called morality police for not compelling with the regime’s hijab rules. She died in custody after being beaten and injured severely.

Now the people are taking a step further and demanding the regime’s overthrow. They do not accept fabricated reforms anymore. The face of these protests differs from the protests of 2019 after gasoline prices increase. The people’s target is the entire regime, especially the supreme leader Ali Khamenei responsible for all the misery the people are suffering from. 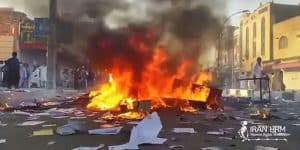 At the Makki Mosque on Friday, September 30, 2022, the Revolutionary Guards opened fire on prayers killing at least 58 people. This brutal act led to protests by the people of Zahedan in Sistan and Baluchistan Province.

Dozens of worshipers remain injured, and protesters chanted “Death to Khamenei” to indicate the perpetrator of the crime. Youths and locals from various cities gathered to take part in the protests and to condemn ongoing human rights violations even after the tragic death of Mahsa Amini.

MEK Supporters Rally in Cologne in Support of the Iran Protests – September 29, 2022

September 29, 2022: Freedom-loving Iranians and supporters of the People’s Mojahedin Organization of Iran (PMOI/MEK) in Cologne held a rally and protested the suppression of the current uprising across Iran. Iranian Resistance supporters in Cologne expressed their solidarity and support for the nationwide protests in the country.

Previous article
Mrs. Maryam Rajavi Meets with Members of U.S. Congress to Discuss the Uprisings in Iran
Next article
Iran: Uprising in Different Parts of Tehran on the 16th Day of the Nationwide Uprising